The Amount, and Variety, of the Heraldry at Frederiksborg Castle Can Be a Bit Overwhelming


At least, I'm feeling a bit overwhelmed, looking at these recent posts. And to think that we're not even to the other aisled of this floor of the Chapel, where the armorial plaques of the members of the Order of the Elephant are!

Still, I find many of these shields fascinating, and I hope that you do, too!

Here we have five more armorial plaques of members of the Order of the Dannebrog:
Kresten Refslund Thomsen (1884-1960, inducted in 1954), county governor and chamberlain: Gules a fess argent and in chief two hearts or;
Joseph Marie Antoine Hubert Luns (1911-2002, inducted in 1954), Foreign Minister of the Netherlands 1956–71, Secretary-General of NATO 1971–84: Azure a bend argent between in chief three mullets of six points two and one or and in base a duck argent beaked and legged or atop a terrace vert;
Aage Svendsen (inducted in 1947) (having trouble finding this Aage Svendsen as opposed to other Aage Svendsens): Gules an open book argent bound sable on it the word LEX azure, in chief a lamp of knowledge argent lit or;
Bodil Nyboe Andersen (born 1940, inducted in 2005), Danish economist: Per pale azure (inducted in almost bleu celeste) and argent, a wreath of ten maple leaves counterchanged; and
Haldor Frederik Axel Topsøe (1913-2013, inducted 2008), Danish engineer and founder and Chairman of the catalysis company Haldor Topsøe: Azure a cross pommety nowy argent between four wheat (inducted in barley?) stalks in saltire based to center or. 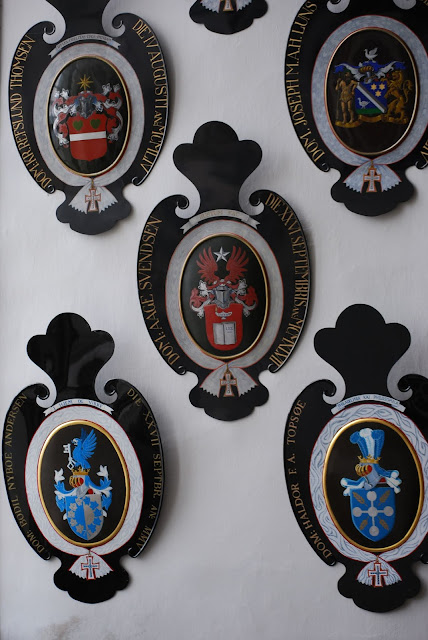 And now we come to one that I photographed by itself, because I have long had an interest in aircraft (especially military, and more especially WWII, but also in general), and because aircraft are so very rare in heraldry.
Carl Christian Jacob Førslev (1891-1959, inducted in 1955), Lt. General, first commander of the Danish Air Force 1950-1955: Azure a chevron between two early 1950s-era jet fighter aircraft argent and a heart or.
If the aircraft were tortoises or insects, we might blazon them as tergiant (having the back turned towards the spectator), or volant en arriere (used of insects, and signifying that they have their back to the spectator). On the other hand, it could be argued that this posture is or should be the default for aircraft, as being its most identifiable orientation (with the possible exception of a Boeing 747, which may be more identifiable from a side view where you can see the "hump" of the cockpit and second-level lounge.
If these aircraft were American-built, I would say that they are P-80 Shooting Stars with wingtip long-range fuel tanks (see, e.g., https://en.wikipedia.org/wiki/Lockheed_P-80_Shooting_Star), but I do not find that P-80s were ever flown by Denmark, just by the USA, Brazil, Chile, Colombia, Ecuador, Peru and Uruguay. 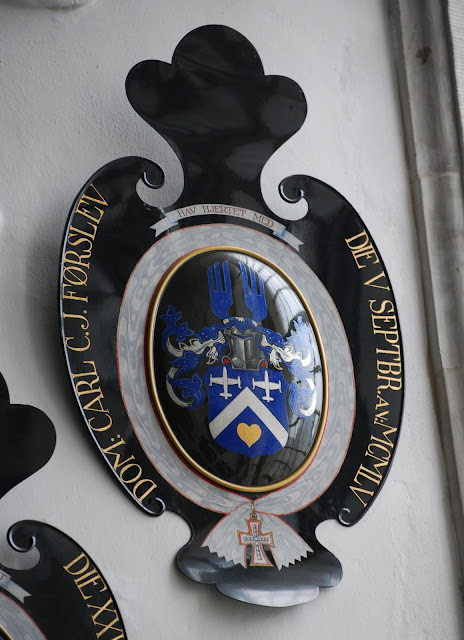 What will we see next time?
Posted by David B. Appleton at 2:00 AM