Do you enjoy seeing these armorial plaques of the members of the Danish Order of the Dannebrog and seeing a little bit about the people whom they memorialize as much as I enjoy having seen, photographed, and then researched just a little about them? I do hope that you are not being bored by what some people might see as a fairly monotonous exercise.

In any event, today we're going to look at some more of the armorial plaques of members of the Order of the Dannebrog, some inducted into the Order in the 1990s, and the rest inducted in the 21st Century, all on one wall at the side of one alcove in Frederiksborg Castle.
As ever, you can click on an image to see a larger, more detailed version, and the blazons here are my own, and thus may not necessarily match any official blazons of these arms.
Kjeld Georg H. Hillingsø (born 1935, inducted in 1995), Lieutenant General (ret.), Azure a cross formy and in base three bars wavy argent; Ole Due (1931-2005, inducted in 1994), Danish judge and the President of the European Court of Justice, Azure an open book argent overall a hanging balance whose upright is a sword inverted [or, reversed] in base two branches of oak crossed in saltire or; and Niels Erling Nygaard Ersbøll (born 1926, inducted in 1994), Chief and Ambassador EC Representation, 1973-77, Secretary-General of the EU Council of Ministers 1980-94, Per bend or and azure. 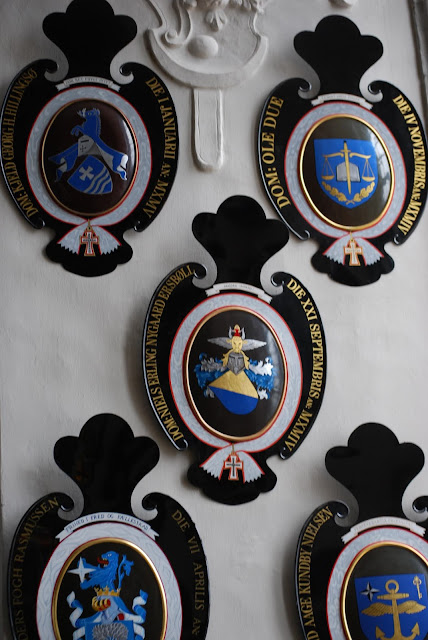 Lars Løkke Rasmussen (born 1964, inducted in 2009), Danish Prime Minister 2009-2011 and 2015-2019, Azure a tree issuant from a mount argent its trunk between two mullets or; Svend Aage Kundby Nielsen (1933 – 2019, inducted in 2000), naval officer and Queen Ingrid’s Chief of Court, Azure a winged anchor or between in chief a mullet of four points gyronny argent and sable and a key palewise wards to base or; Per Thornit (born 1942, inducted in 2006), Danish Chamberlain and Crown Prince Frederik and Crown Princess Mary’s chief-of-court, Gules two eagle’s heads erased and a rose or. 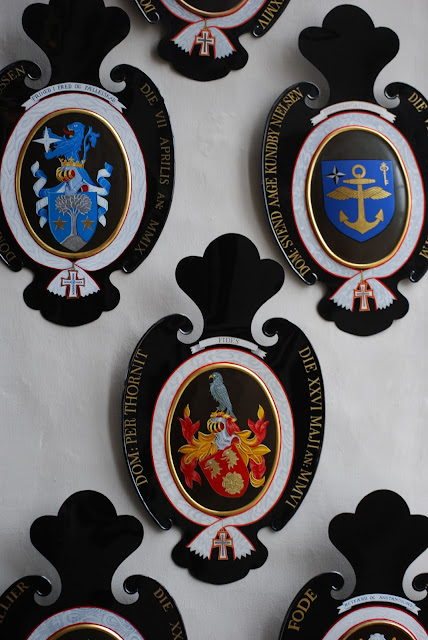 Alain D.M.M. Cavallier (inducted in 2008), Argent a mounted knight armed cap-a-pie his horse rearing azure between three fleurs-de-lis gules; and Henning Fode (born 1948, inducted in 2012), Danish civil servant who is the Private Secretary to Margrethe II of Denmark, Per pale or and azure a standing balance on a base two hearts all counterchanged. 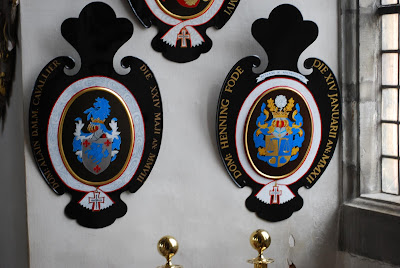