Back to the 18th Century!


Forging ahead on our review of many of the armorial plaques of the Order of the Dannebrog displayed in Frederiksborg Castle, we "return ... to those thrilling days of yesteryear" (as the introduction to the old Lone Ranger television series put it, and look at a few more arms from members of the Order inducted in the 18th Century. 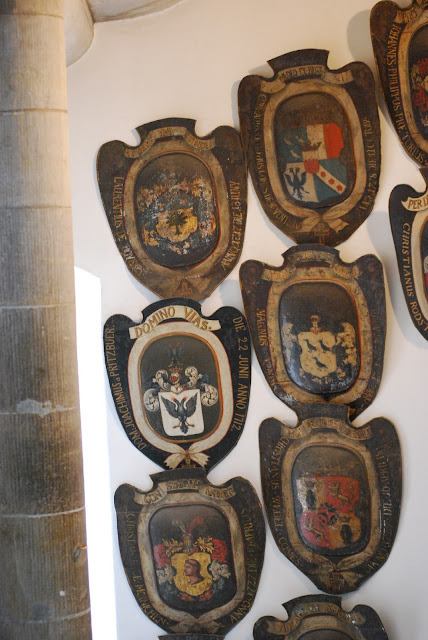 Beginning with the plaque at the the top left and then moving to the right, and then down to the left, and so on, we find the following coats of arms.
As always, please click on the image above to see a larger and more detailed photo of these plaques.

Lawrence de Boysset (1633-1728, inducted in inducted in 1717), a French-born Danish military officer and landowner: Or a tree proper on a chief azure two fleurs-de-lis or.

Christian Møinichen (1683-1749, inducted in inducted in 1727), Chief Secretary of the Danish Chancellery: Or a blonde monk’s head proper (canting arms).

Christian Wedel, Count of Wedellsborg (inducted in 1727), Quarterly: 1 and 4, Or a cannon barrel sable [proper?] crowned or; 2 and 3, Gules a lion rampant or; overall on a roundel per pale gules and sable a man’s head and torso proper vested and hatted per pale sable and gules, a bordure compony gules and sable. [That’s weird, right? Yeah, that’s not exactly how it should look. Below is a better image pulled from geni.com of what it should be.] I’m not certain who this specific individual is, unless it is Christian Gustav Wedell-Wedellsborg (1701-1759), but he would have been very young (only 26) to have been inducted into the Order in 1727.) 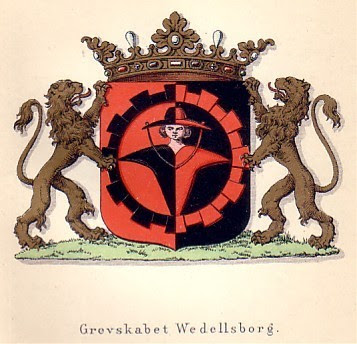