And Then ... They Took Us Downstairs!


Continuing our guided tour of St. Bavo's Cathedral in Ghent, Belgium, we were led into areas of the cathedral that the public generally doesn't see. For example, the rooms where the cathedrals vestments are kept. Which is what my wife, a fiber and textile artist, was especially interested in. 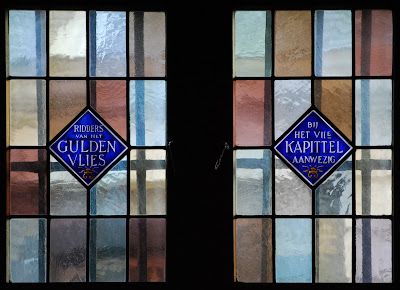 And, of course, the arms of the Bishop of St. Bavo's Cathedral were prominently displayed in  the windows there. Here's two pictures taken from different angles of the same window: 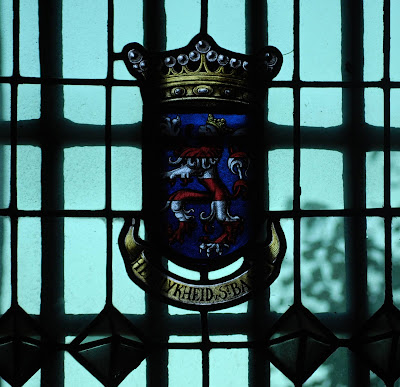 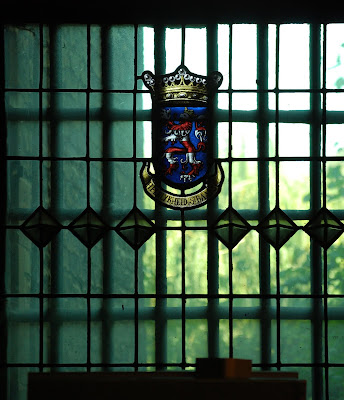 We have seen these arms elsewhere in the cathedral. The are blazoned: Azure on a lion rampant argent crowned or three bars gules.
And then, of course, there were the arms of the knights themselves. Here's the first batch from the Chapter held in the Cathedral in 1445. (That they all appear on lozenges does not mean that they are women's arms; it was seemingly just an artistic decision to place them in the windows in this shape.)
The identifications of these arms, which you can go back and compare with their stall plates from recent posts - because they don't always match! - are identified in each window from left to right, top to bottom: 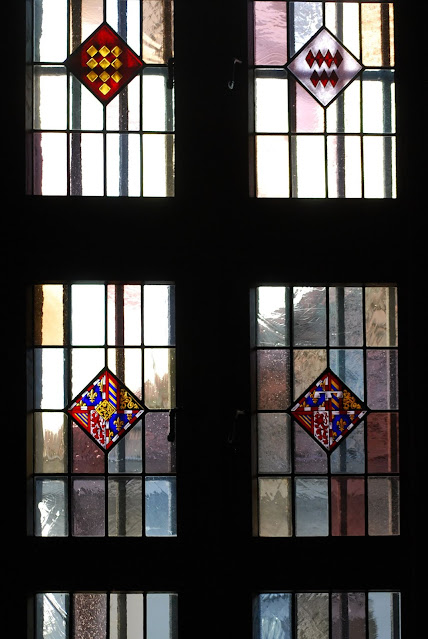 Here we see the arms of:
Simon de Lalaing, Seigneur of Santes: Gules ten lozenges conjoined three three three and one or. His stall plate makes the lozenges correctly argent, with the first lozenge charged with a lion rampant gules.

Philip III (the Good), Duke of Burgundy, Lothier, Brabant, and Limbourg, Count of Flanders, Artois, and Palatine Burgundy (and more, hidden by the shelf; he was also the Grand Master of the Order of the Golden Fleece at the time of the 1445 Chapter): Burgundy overall an inescutcheon Or a lion rampant sable.
Charles of Burgundy, Count of Charolais: Burgundy overall a label of three tags argent.
Next up, we have: 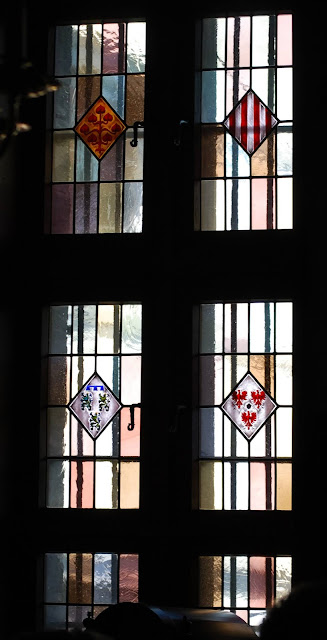 In this window, we see:
Jean VI, Duke de Bretagne [Duke of Brittany] and Count of Montfort Trepassé: Ermine.

Jean IV, Seigneur of Auxy: Checky or and gules.

Jehan de Croy, Seigneur of Tour sur Marne, or Antoine de Croy, Count of Porcéan, Seigneur of Renty: Quarterly: 1 and 4, Argent three bars gules; 2 and 3, Argent three axes gules the two in chief addorsed.
Someone stepped in front of me as I was taking this photograph, so the arms in the lower left are obscured. We will see the hidden arms in the next post.

Baudot de Noyelles-Wion, Seigneur of Casteau: Gules three bars gemel a label or. (We will see these arms again in our next post.)
Next time, the rest of the arms from the 1445 Chapter placed in these windows.
Posted by David B. Appleton at 2:00 AM