So, having finished our heraldic tour of Belgium, in the cities of Antwerp and Ghent, we hopped a plane to Copenhagen, Denmark. And it didn't take us long to see heraldry there, either!

Indeed, on the way from the airport to our hotel, we passed the Hôtel d’Angleterre:* 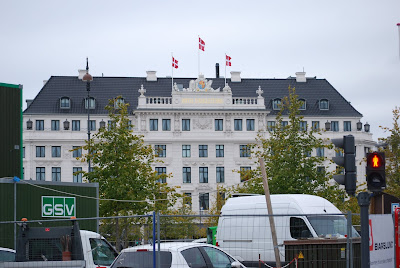 Which has, right at the top center of its façade, the arms of the United Kingdom of Great Britain and Northern Ireland. 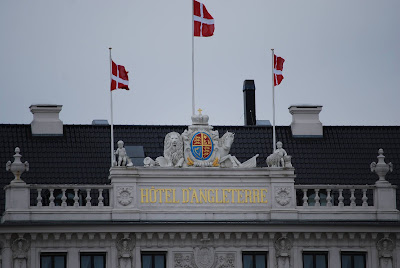 What this meant, of course, is that the first heraldry that we saw was what I described in another post just a couple of weeks ago as an "heraldic stray", a coat of arms belonging to someone or something from somewhere other than where it appeared. 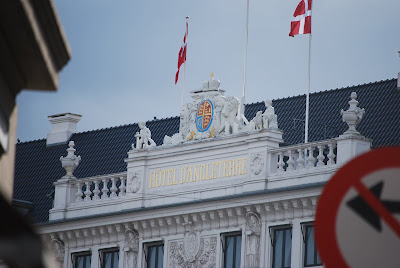 The saving factor, if you will, of finding right off the bat (or rather, right off the airplane) the arms of the UK in central Copenhagen, Denmark, is that the same display of heraldry also features not one, not two, but three Dannebrogs, the Danish national flag (Gules a Nordic cross argent; a "Nordic cross" on a flag is one set to dexter, like a Latin cross fesswise).
So, as I said in the title to this post: Welcome to Denmark, and Welcome to Copenhagen.
Which welcome was followed almost immediately by a representation of the arms of the United Kingdom.
So there you go. Not quite what I had expected, but then, heraldry does seem to have a way of surprising us when we look for it.
* Yeah, I know. That name is not Danish; it is French, for the Hotel of England, or the English Hotel. I have no idea why a hotel in Copenhagen, Denmark, would be named in French.
Posted by David B. Appleton at 2:00 AM