There Is Always Heraldry Nearby


One of the (many) things that I like about Europe is that there is always heraldry to be seen nearby. Often very nearby. Right outside the front door, many times. (Sometimes right outside your window, but we'll get to that one next time.)
In this instance, our hotel was right across the street from this building. 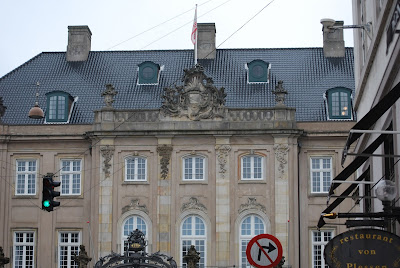 Here's another shot, with closer view of the armorial achievement on the façade and the flagpole, where you can see the flag better: 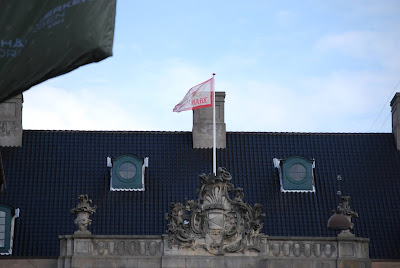 The letters on the flag read: I.O.O.F. DANMARK (along with the three link chain emblem of the organization), for the Independent Order of Odd Fellows. The building is known now as the Oddfellows Mansion.
All that is interesting enough by itself; I mean, our home in the small town where I graduated from high school was diagonally across the nearest intersection from the local Oddfellows hall. But of course it was the heraldry that intrigued me the most. 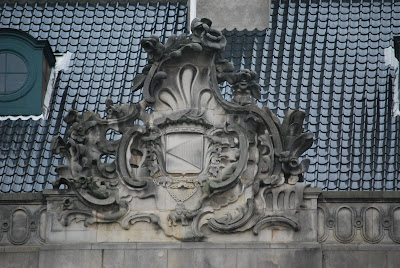 The arms are surrounded by a collar of the Danish Order of the Elephant, and the shield is surmounted with the coronet of a Danish count. (Please feel free to click on any of the images above to see a larger, more detailed version.)
It turns out that these are the arms of Christian August von Berkentin or Berckenthin, Greve af Berkentin, a German count in Danish service. His arms would be blazoned in English as: Per fess or and argent a pile issuant from sinister throughout gules. His arms, too, appear in the digitized books of the Order of the Elephant, at http://static-vb.kongehuset.dk/vb/01/html5forpc.html?page=0 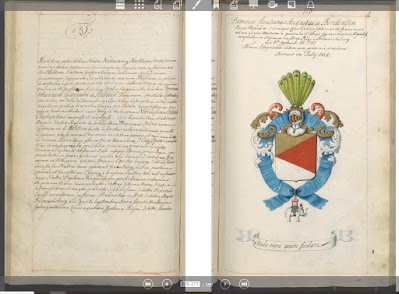 Count von Berkentin's career is an interesting one, and you can learn more about him, and his house, at on-line at https://de.wikipedia.org/wiki/Christian_August_von_Berkentin
Before it became known as the Odd Fellows Mansion in 1900 when the IOOF bought it, the residence was known as the Berckentin, and later the Schimmelmann Mansion, after its successive owners.
What an interesting history this building has. And isn't it great that they have kept the heraldry of the original owner, for whom the mansion was built?
Posted by David B. Appleton at 2:00 AM