This final post about heraldry in St. Bavo's Cathedral, and indeed the final post from Ghent and from Belgium, is a bit of potpourri of heraldry.

Are there more coats of arms in the cathedral that I haven't posted about? Yes, yes there are. But I have been unable to (so far) confirm the identity of the armigers, and since there are only so many hours in the day, and I've got other things to do (and to post about), and the final few coats of arms will require more and more time per coat to identify, thus leading to diminishing returns, we're going to call it quits for now.

Among the final few bits of heraldry, we have an interesting selection, done in glass, in metal, and in stone. 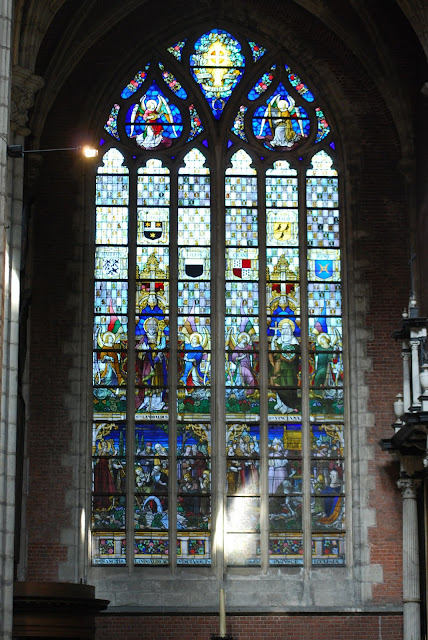 First up is this lovely window, with six coats of arms incorporated into it. Fortunately for us, they actually labeled each coat, making a rough identification very easy. 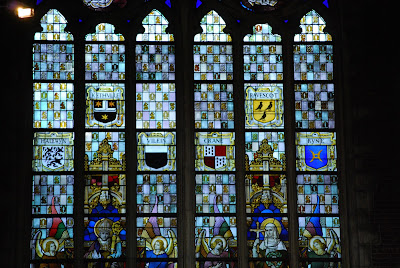 Running from left to right in the upper part of the window, we have the arms of:
Halewyn, Argent three lions rampant sable;
Kethulle, Sable a fess conjoined to a demi-pale in chief argent between three mullets of six points or;
Vilein, Sable a chief argent;
Crane, Quarterly: 1 and 4, Argent eight billets two one two one and two sable; 2 and 3, Gules; Ravescot, Or three ravens close sable; and
Ryne, Azure a millrind or.
(As always, you can click on the image above to see a larger, more detailed picture.)
Then, in metal, we ran across this heraldic "stray" (I call it a "stray" because it's found someplace where you wouldn't expect to find it, far from its home): 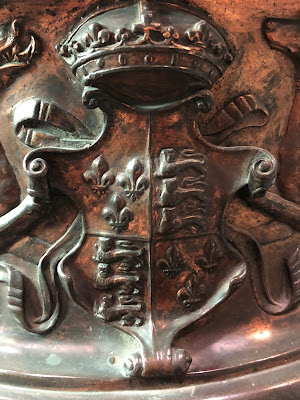 I always find it interesting, that nearly wherever I go, I seem to run across one depiction or another of the royal arms of England or Great Britain.
Here, of course, on the base of a stand, is the coat of arms of England from 1406 to 1603. Quarterly: 1 and 4, Azure three fleurs-de-lis or (France modern); 2 and 3, Gules three lions passant in pale or (England).
Finally, we have two armorial shields literally carved in stone: 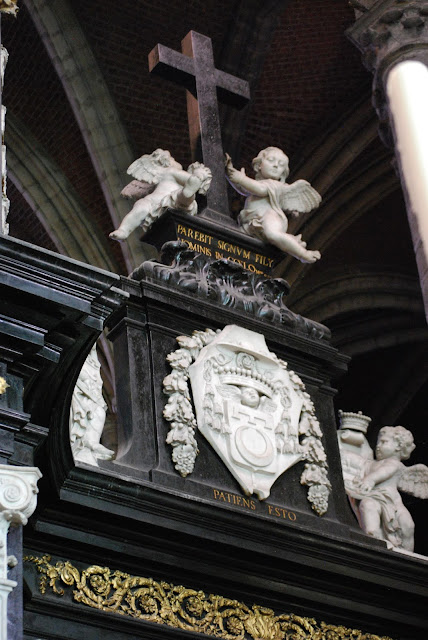 On this highly ornate memorial, we have these arms: 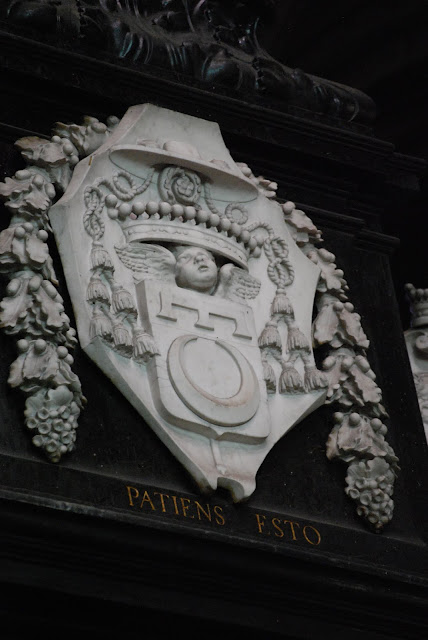 These are the arms of Eugeen-Albert, count d'Allamont (1609–1673), Bishop of Ghent from 1666-1673. We know what the colors of the shield are, both from the stained glass window of the arms of the first 28 Bishops of Ghent, and from an armorial portrait of him (immediately below) that I ran across on Wikimedia. 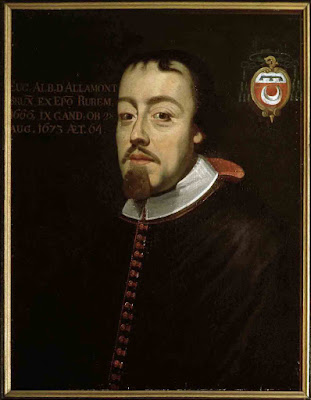 The arms are blazoned: Gules a crescent on a chief argent a label of three tags azure.
And last, but certainly not least, we find this coat of arms: 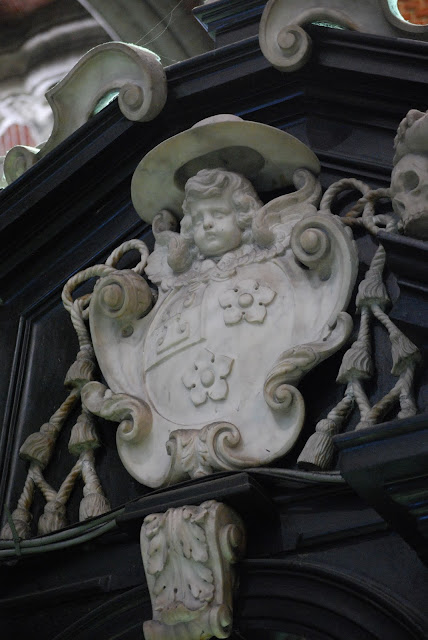 These are the arms of Charles Maes (1559–1612), Bishop of Ghent from 1610-1612. Again, from the colored arms in the window commemorating the first 28 Bishops of Ghent, we know that these arms should be colored as: Azure three roses argent on a canton or a zule (column) gules.

And thus we end our heraldic tour of Antwerp and Ghent, Belgium. I hope that you have found at least some of these posts educational, or at the very least, sometimes interesting.
Next time, we head off to Denmark! Stay tuned to see what heraldic treasures we may have seen there!
Posted by David B. Appleton at 2:00 AM