And Then ... They Took Us Downstairs! Part 2


Continuing our look at the stained glass windows with the arms of Knights of the Golden Fleece from the 1445 Chapter of the Order, find:

Gules a bend sinister or. (Possibly de Hennin, Seigneurs and Counts de Boussu, whose arms were Gules a bend or, but the dates of their induction and death do not permit them to be members at the time of the Chapters.) A little more likely is that the arms here are a miscoloration and reversal of Jehan de Neufchâtel, Seigneur de Montagu, Gules a bend argent.

Argent a fess sable. Could this be a reversal of the tinctures in the arms of Henry de Borsele, Seigneur of Vere, Count of Grandpre: Sable a fess argent? Given some of the other miscoloration issues in these windows, I think it likely. 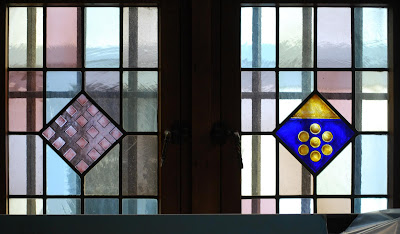 André, Seigneur of Humières: Argent fretty sable. (Yeah, I know the field looks gules here, but I suspect that is a result of other factors like impurities in the glass, background colors bleeding through, and/or something similar.)
Jehan de Melun, Seigneur d'Antoing. Azure seven roundels one two one two and one a chief or. The more common arrangement of the roundels is three, three, and one. 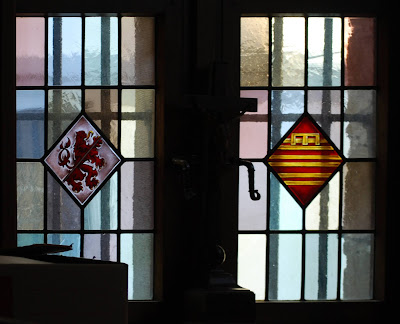 Jean bâtard of Luxembourg, Seigneur of Hautbourdin: Argent a lion rampant queue forchy gules debruised by a bendlet sable. (The window has the arms reversed, making the lion “rampant to sinister” and the bendlet a “bendlet sinister”.)
Baudot de Noyelles-Wion, Seigneur of Casteau: Gules three bars gemel overall a label of three tags or. (His stall plate has the bars as argent.) We saw these arms in the previous post, as well.
And finally, to finish off the arms of the knights of the 1445 Chapter: 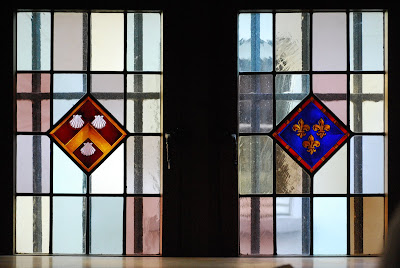 Jehan, Seigneur of Comines: Gules a chevron or between three escallops argent a bordure or.
Jean II, Duke of Alençon, Count of Perche: Azure three fleurs-de-lis or a bordure gules bezanty. (The bordure should be platy, e.g., semy of roundels argent, and the glassworker made the “roundels” as squares. Well, sure, it’s easier to do it that way in glass!)
Next time, we find arms from the 1559 Chapter of the Order of the Golden Fleece.
Posted by David B. Appleton at 2:00 AM