And Then ... They Took Us Downstairs! Part 4


In this last part of the windows of the arms of the Knights of the Golden Fleece from the 1559 Chapter of the Order held in St. Bavo's Cathedral in Ghent, Belgium, we see these arms:

Maximilian, King of Bohemia, Archduke of Austria (later HRE Maximilian II) (1527-1576): Or a double-headed eagle displayed sable on its breast an inescutcheon: Quarterly: 1, Barry argent and gules; 2, Gules a lion rampant argent; 3, Per pale, Gules a fess argent, and Or two bendlets azure within a bordure gules; and 4, Quarterly: i and iv, Gules a tower or; ii and iii, Argent a lion rampant (purpure).

Cosimo I de' Medici, Duke of Florence (later the first Grand Duke of Tuscany) (1519-1574). Or six torteaux one two two and one the chiefmost Azure three fleurs-de-lis or.

Claude de Vergy, Comte de Gruères (1495-1560): Gules three roses (or cinquefoils) or.
(Yes, there's another coat of arms in the lower right, but it's blocked from view. Sorry!) 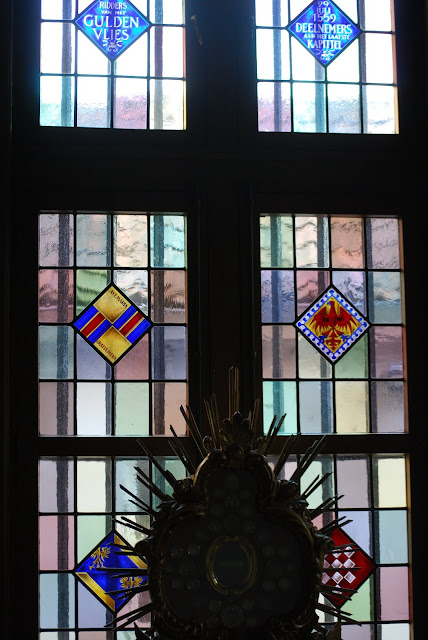 Here we have the top windows that specify that these are Knights of the Golden Fleece of the 1559 Chapter. Beneath those windows, we see the arms of:
Iñigo Lopez de Mendoza, 4th Duke of l'Infantado (1503-1566). Per saltire: chief and base, Or the words Ave Maria in chief and Gratia Plena in base sable; in fess, Azure a bend sinister gules fimbriated or. The quarters are reversed in the window from what they ought to be. It may be that the arms were rotated clockwise 45 degrees when they were placed in the window, because if they were rotated 45 degrees counter-clockwise, they would be correct. Feel free to go back a few posts to compare with the stall plate for the Duke.

Friedrich von Fürstenberg (1496-1559): Or an eagle displayed gules a bordure per bordure nebuly azure and argent.

Joachim, Seigneur [lord] de Rye: Quarterly: 1 and 4, Azure an eagle displayed or; 2 and 3, Azure a bend or. (Yes, they did the bend effectively as a bordure here. Just another one of the issues of trying to place quartered arms on a lozenge shape!)

Ponthus de Lalaing, Seigneur de Bugnicourt: Gules ten lozenges conjoined three three three and one argent.
And this concludes our look at the stained glass windows of the arms of the knights of the Order of the Golden Fleece, tucked away in the bowels of St. Bavo's Cathedral.
I hope you have enjoyed this little tour!
Posted by David B. Appleton at 2:00 AM