Stall Plates of the XXIII Chapter of the Order of the Golden Fleece, 1559, Part 4


In our final post of the stall plates of the XXIII Chapter of the Order of the Golden Fleece held in 1559 in St. Bavo's Cathdral, we see the following.

As always, I recommend clicking on an image to see a larger and more detailed photo of these armorial plates.

Anyway, from left to right, we have: 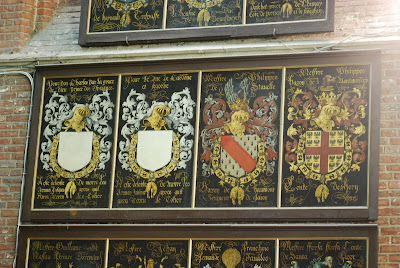 Philippe de Montmorency, Count of Horn (1518-1568): Or a cross gules between sixteen eagles displayed four four four and four sable.
Immediately below those four plates we have: 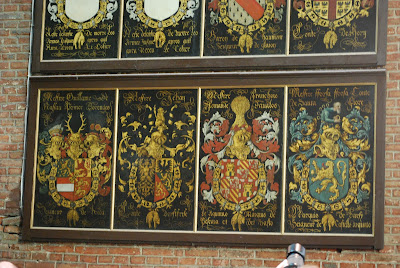 William I, Prince of Orange, seigneur de Breda (1533-1584): Quarterly: 1, Azure billety a lion rampant or; 2, Or a lion rampant gules crowned sable; 3, Gules a fess argent; 4, Gules two lions passant guardant in pale or; overall an inescutcheon: Quarterly: i and iv, Gules a bend or; ii and iii, Or a hunting horn azure stringed gules, overall an inescutcheon Checky of nine or and azure (or, Or a cross quarter-pierced azure) (Châlon-Arlay as Princes of Orange).

Johan I of East Frisia (1506-1572): Per pale: Sable a frauenadler between four mullets pierced or; Per bend azure and gules, two lions rampant or, on a chief or an eagle displayed issuant sable (or, a chief of the Empire).

Francisco Fernando d'Avalos d'Aquino, 5th Marquis of Pescara (?-1571): Quarterly: 1 and 4, Gules a tower or a bordure compony argent and gules; 2 and 3, Quarterly: i and iv, Or three bendlets gules; ii and iii, Per fess argent and gules a lion rampant counterchanged.
Ascanio Sforza-Sforza, Count of Santa Fiora (1520-1575): Azure a lion rampant or maintaining in its sinister forepaw a rose or slipped and leaved proper.
And last, but certainly not least, we see: 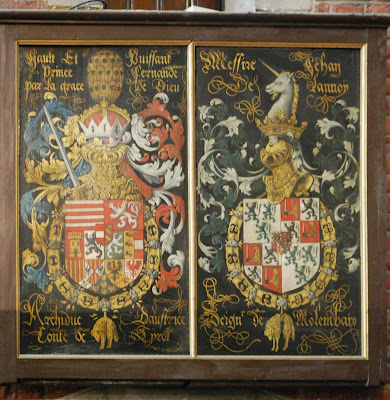 Archduke Ferdinand of Austria, Margrave of Burgau, second son of Emperor Ferdinand I (1529-1595): A very complex coat of arms, as you might expect, and one which I am not going to blazon here. Feel free to make the attempt yourself; I won't try to stop you.

Jean de Lannoy, Seigneur de Molembaix (1509-1560): Quarterly: 1 and 4, Argent three lions rampant azure; 2 and 3, Quarterly: i and iv, Gules a winged arm or maintaining a sword erect proper; ii and iii, Argent a lion rampant sable crowned or; overall, an inescutcheon of Burgundy.
And this ends our look at the stall plates of the 1559 Chapter of the Order of the Golden Fleece, held in St. Bavo's Cathedral in Ghent, Belgium. I hope that you have found this review of the stall plates from both the 1445 and 1559 Chapters on exhibit in the Cathedral to have been of interest.
Now if I could just get my own coat of arms painted on a large board in the manner of these stall plates. (Of course, I have no idea where I would hang it! I can't think of any really good spaces in my house for such a display of armory.)
Posted by David B. Appleton at 2:00 AM