Yeah, you know me too well; mostly heraldry.
Right next door to the Cour St. Georges that we looked at in my last post is another eatery, the Café den Turk, "Ghent's oldest café" according to their website, which says they were established in 1228. 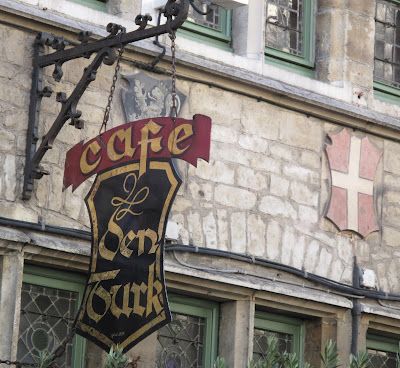 Here, hiding behind their sign, you can see the upper half of the arms of Ghent, Sable a lion rampant argent crowned or. Next to it is a shield, Gules a cross argent, which I have not yet identified for certain. (Crosses, like lions, are ubiquitous in European and Flemish heraldry.)
And a little higher on the façade of the building we find these painted shields:

From left to right, we have the coats of arms of: 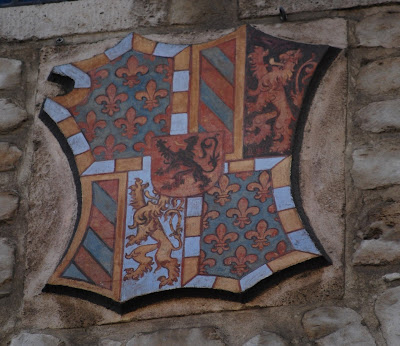 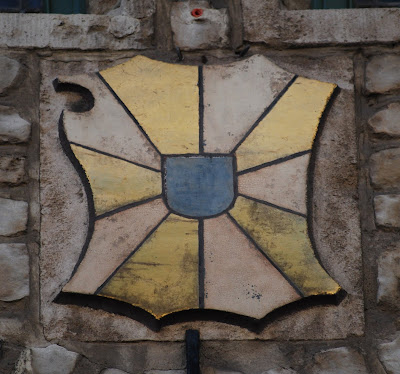 the old historical arms of Flanders, Gyronny (usually of 10 or 12) or and azure an inescutcheon gules (yeah, I don’t know why the blue has been moved from the field to the inescutcheon either); 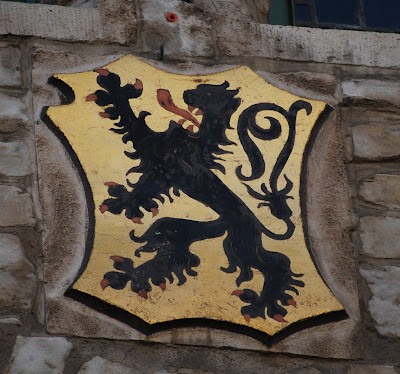 and the historical arms of the Counts and County of Flanders, Or a lion rampant sable armed and langued gules. Nowadays these last two coats of arms are marshaled onto a single shield as the arms of West Flanders (West-Vlaanderen), for which see http://heraldry-wiki.com/heraldrywiki/wiki/West-Vlaanderen.
Posted by David B. Appleton at 2:00 AM