Is It Heraldry? Or Is It a Political Statement?

Moving past the heraldry, and non-heraldry, on the façade of the Institut Laurent, we found ourselves being led down an alleyway which was covered with all kinds of graffitied artwork. It is named Werregarenstratt, but everyone just calls it Grafittistraatje. The city has designated this walkable alley as a space where graffiti paining is not only allowed, but encouraged! It is very colorful, and some of the artwork shows a lot of skill and imagination.
Nonetheless, one of the pieces that caught my eye was not very large, but because it was "on" a shield, it attracted my attention. (See my post of November 2, 2020 for a more complete description of how this works on me.) 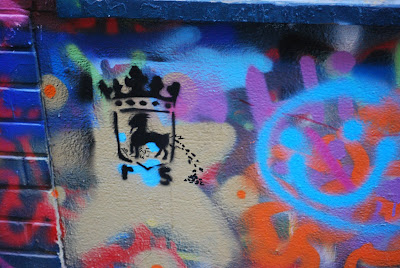 See? Shield, surmounted by a coronet. Instantly attractive to all but the most jaded heraldist. But what's happening on, and even more off, the shield? 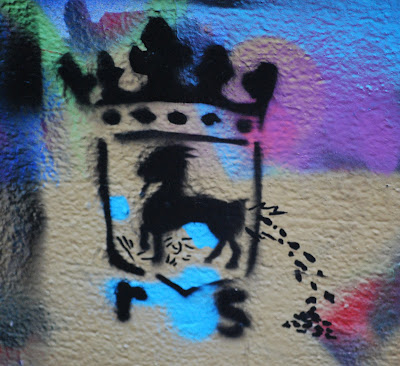 The critter on the shield looks more like a ram statant to me than it does an heraldic bonacon,* but what's the deal with the, umm, "ejecta" flying off the shield to sinister?
Is it heraldry? Or is it a political statement, one that I, as a foreigner there, don't quite catch?
In some ways, it really doesn't matter. It is a statement, artistic or political or whatever, that uses heraldic imagery to make it's point. Thus demonstrating that heraldry, in one form or another, is still alive and kicking here in the 21st Century.
* As we learn in Monsters Of Heraldry by Donald R. Barnes: "The BONACON has a body and head like a bull, but with a horse's mane. It curled horns are useless for attacking, so (as it retreats) it releases the contents of its large intestine, and this fiery excretion covers 3 acres (that's 1.2 hectares if you want it in metric) and burns to a crisp anything or anyone in that area." Not something you'd want to stand behind, then.
Posted by David B. Appleton at 2:00 AM