Of course, the City of Ghent, whose arms we have been looking at in the last two posts, is located in Flanders, which has its own coat of arms, which can also be seen here and there about the city. Because you can never display too much heraldry, don't you know?
These two examples come from the same building where we saw the arms of the City of Ghent: the Belfort, one of three medieval towers overlooking the old city center. It's 91 meter (298 feet) belfry is the tallest in Belgium.
Here we have the arms of Flanders (Or a lion rampant sable) along with the arms of Ghent (Sable a lion rampant argent) on the tower's shutters: 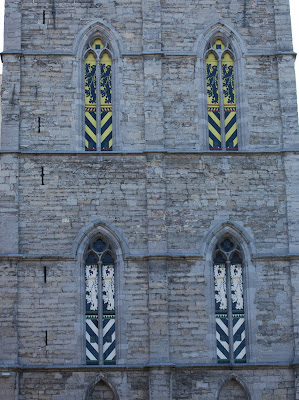 And here, the arms of Flanders being supported by a single lion on the façade of the Belfort: 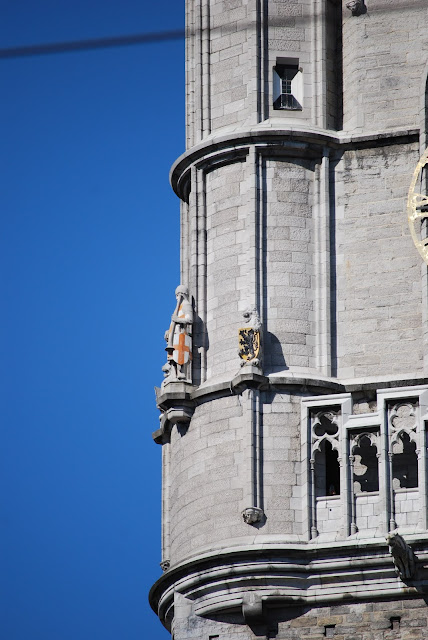 Elsewhere, the storefront of a souvenir shop displays the flag of Belgium and the flag of Flanders: 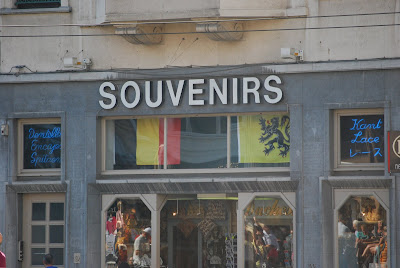 And finally, on the façade of another building, the paired arms of Ghent and Flanders (we will see this building again, in connection with some of the other heraldry on its exterior): 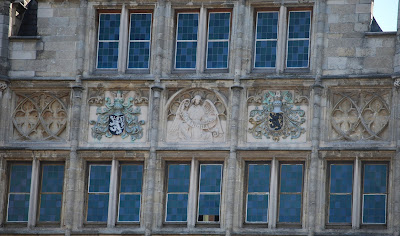 Here you can see (please click on the image above to see a larger version of this photo to get all of the details) the arms of the City of Ghent (on the left) and those of the County of Flanders (on the right). Each bears a crest above the shield of a winged lion's head affronty; the crest on the arms of Ghent has the lion's head crowned, and the arms of Flanders are surrounded by the collar of the Order of the Golden Fleece.
You have to love heraldry! If you were, by some chance or quirk of fate, to be rendered unconscious and flown from wherever you live, to awaken in the square in front of this building, you could have no doubt about exactly where you were. Those two coats of arms would tell you, every bit as much as a sign at the edge of town, "Welcome to Ghent, Flanders"!
Posted by David B. Appleton at 2:00 AM