So, having shared images of the arms of the City of Ghent, and of the Dutch-speaking northern portion of Belgium which was once a County, Flanders (though there will be another example of these arms coming soon to a blog post near you!), there remains another example of civic heraldry to be seen in Ghent.
And that would be ... tada! The arms of the nation itself, Belgium!
First, to give you a little idea of the context of this rendition of the arms of Belgium, here's the full façade of the building on which it is placed: 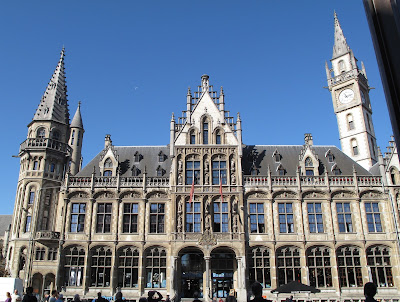 I know, it's a lot to take in. (You can click on the image above to see a full-size picture that will show you a lot more of the details contained herein.) There are a number of statues on the face of the building, each holding or standing next to a coat of arms.
But the one bit of heraldry that we're looking for right now is placed directly above the double arches in the center: the arms of Belgium. 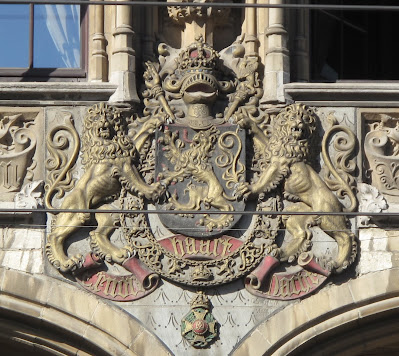 The arms are blazoned: Sable a lion rampant or armed and langued gules. (These are the same as the arms of the Duchy of Brabant, which we have seen a number of times in Antwerp.) The supporters are, unsurprisingly, two lions rampant gardant or. Behind the shield are, in saltire, a hand of justice and a scepter topped with a lion. The crest is a royal crown. The motto on the scroll beneath the arms is Eendracht maakt macht (Unity is Strength). The arms are surrounded by a Collar which I have not yet been able to identify. It consists of alternating lions and crowns with the intertwined initials "BE". (The Collar surrounding the arms these days is that of the Order of Leopold, but both the collar and the dependent medal differ from the collar and medal here.)
And that, my friends, is how you do a national coat of arms, deeply carved and colorfully painted on the façade of a building!
Posted by David B. Appleton at 2:00 AM