Wandering about the streets of old Ghent, Belgium, you will see buildings with statues of various individuals on their façades. And, as you look, you find that some of these statues also have heraldry.
Here, for example, if you look closely at the three pairs of individuals literally carved in stone (you may want to click on the image below in order to see a full-size version with greater detail) ... 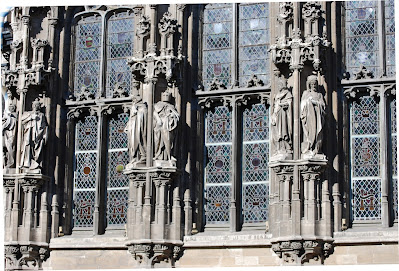 ... you might notice that the third figure from the right is holding a shield with a design on it.
Looking more closely, and we see this:

The legend carved below his feet tells us that this is Robrecht de Fries (Robert the Frisian). He is better known in English as Robert I Count of Flanders (c.1035-1093). (For those of you who don't read much history outside of England, his sister Matilda was married to William the Conqueror. Yes, that William.)
Though he himself lived prior to the age of heraldry (as did his brother-in-law), on the kite shield he is holding you will see a Maltese cross* (colors unknown), and even better, on his right shoulder he bears a small heater shield with the old, historical arms of Flanders, Gyronny (usually of 10 or 12) or and azure an inescutcheon gules. (We have seen these arms earlier, though with two of the three colors incorrectly painted, on the façade of the Café den Turk.)
* Because he died before the establishment of the Order of the Knights of the Hospital of St. John of Jerusalem (the Knights Hospitaller) around the time of the First Crusade (1099), whose later base on the Island of Malta gave this type of cross its name, it might be more accurately termed a cross formy swallowtailed or a cross of eight points. But that's getting awfully picky. The name by which it is best known today is Maltese cross, and that name is probably the clearest to modern heralds and heraldists.
Posted by David B. Appleton at 2:00 AM