It's Thanksgiving Day here in the United States, where we celebrate a tradition - going back to the year 1621 - of cooking a really big meal, eating until we can't eat anymore, and then taking a nap.
No, wait, that's the modern version. The original, held in what is now Plymouth, Massachusetts, involved a big feast with lots of good food stretched out over three days.
But even just thinking about all that food and old traditions and stuff reminds me of some good food set in an old building with coats of arms on its exterior that we saw in Ghent.
Coming around the corner from the City Hall, what did we see but this: 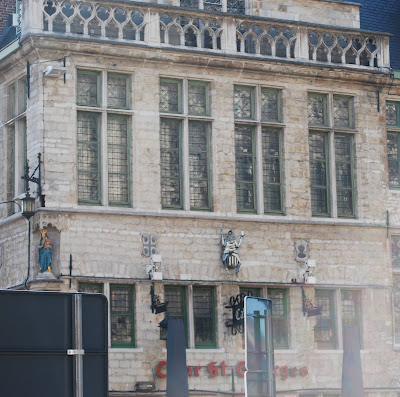 This is the Sint Jorishof, the Cour St. Georges restaurant, which has been an inn and restaurant for centuries. It is located in "a venerable old house dating from 1228." It also gets pretty high marks from reviewers for its food, service, and value.
But you know me! I barely registered what it was because I was too busy looking at the heraldry affixed to its face.
To the left, we have a shield of the arms of Sardinia. 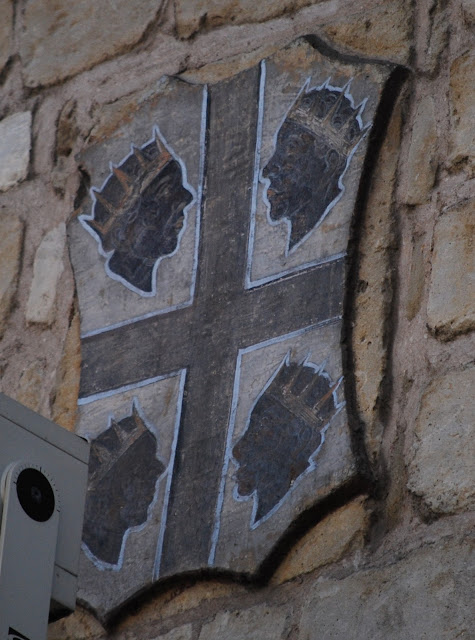 The arms of Sardinia are blazoned: Argent a cross gules between four heads couped sable; here, the heads are crowned or and are all facing towards the center of the shield (what heralds would blazon as respectant). And if that cross is truly gules (red), it has faded badly.
To the right are the arms of Corsica: 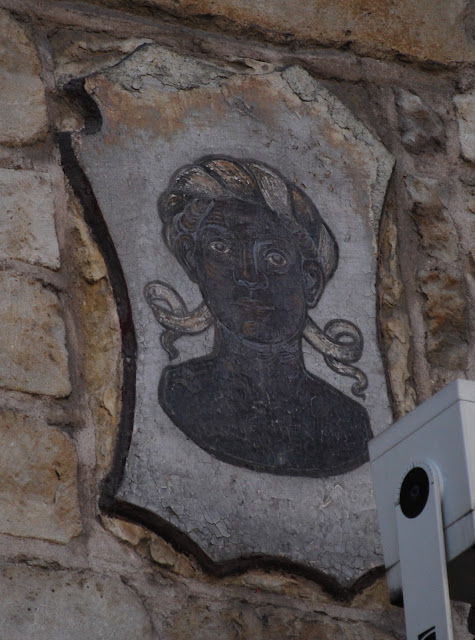 The arms of Corsica are blazoned: Argent a head couped sable wreathed about the temples argent; the head here is affronty couped at the shoulders and wreathed argent and or.
I have no idea why the (somewhat incorrectly drawn and painted) arms of Sardinia and Corsica are on the exterior walls of this restaurant.

I do, however, really like the metal sculpture of the man sitting atop a large keg and brandishing a fork in one hand and a mug in the other. He really looks like he is enjoying himself, and even perhaps, as I am today, following an old tradition of giving thanks for good food, good drink, and good friends.