Ghent: The Full Achievement of Arms

Having looked at some of the many instances of the arms of the city of Ghent to be found in the town, we now come to a couple of buildings on which is displayed the full achievement of arms; that is, arms, motto, and supporters. You know, artistic frou-frou extraneous to the shield.
Anyway, the first example is found on the front of the City Hall: 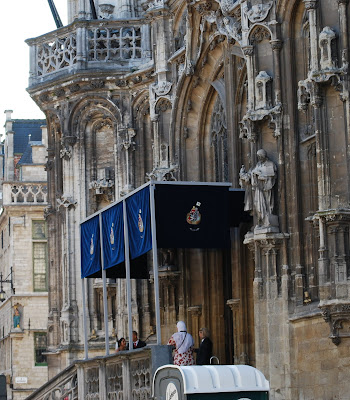 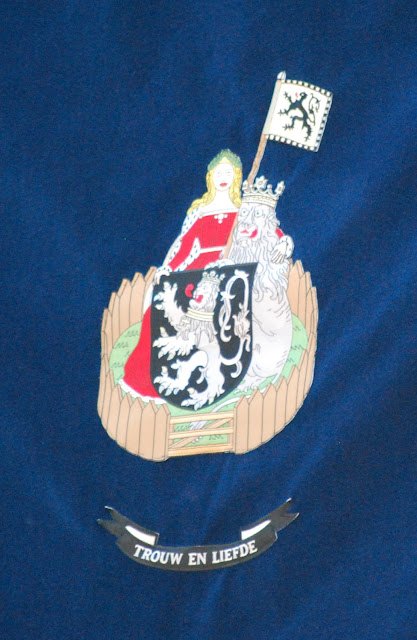 Here we see the arms of the City of Ghent (Sable a lion rampant argent crowned and collared with a cross depending from the collar or), being supported by a lady dressed in red and ermine and a lion argent crowned or, the two supporting a banner of the arms, all within a park (a circular space enclosed with pales and having a gate in front, per Parker's A Glossary of Terms Used in Heraldry). Below the achievement is a scroll with the motto Trouw en liefde (Loyalty and love).
And, in addition to Loyalty and Love, I might add Trust. Because it would take a lot of trust to permit a real lion to basically sit on your lap and put your arm about its neck, all while within an enclosure that would not be simple to escape from quickly should the lion decide for some reason that maybe you looked like lunch. Just saying.
On another building nearby, there was a carved stone version of this achievement of arms: 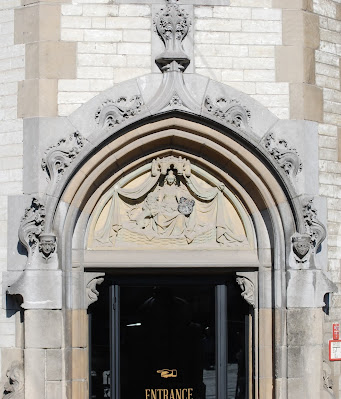 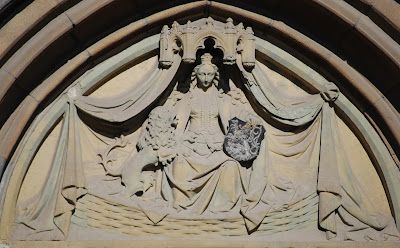 Here we are missing the banner and motto, and there is no gate to the park, which here is made of woven laths rather than pales, and the lion supporter looks like he might rip a leg off (you can click on the image above to see a larger, more detailed photo to get the full effect), but the arms (Sable a lion rampant argent crowned and collared with a cross depending from the collar or) are still clearly those of the City, and the effect of the whole, especially with the mantle behind the figures and the city wall above, is both dynamic and yet somehow still at the same time.
In the end, two more nice examples of the display of the City's heraldry!
Posted by David B. Appleton at 2:00 AM