A Tale of Two Families


Or, at least, the windows and paintings of the coats of arms of two families.

Today, we're going to review the stained glass windows and paintings memorializing one of these two families. Next time, we'll look at those of the other family. And following that, we'll look at those containing both families, which will probably take two posts, simply because of the sheer number of times their coats of arms appear together, sometimes in conjunction with, sometimes marshaled. 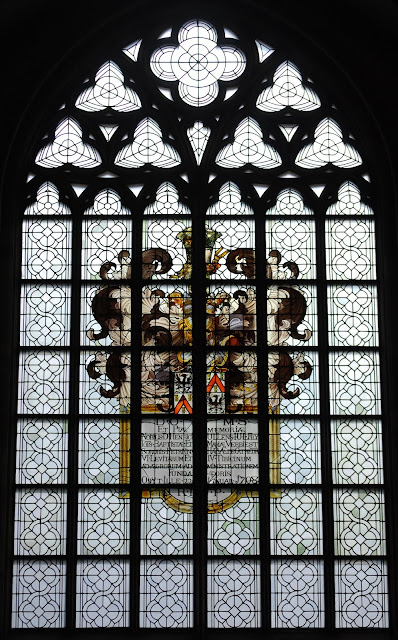 The first window we're going to look at contains quartered arms of the families of Ullens and Verbiest. This window was created by Hendrik de Coninck in 1708, and was repaired in 1867 by Jean-Baptiste Capronnier, but in a somewhat more austere version than most of the other windows in the Cathedral. 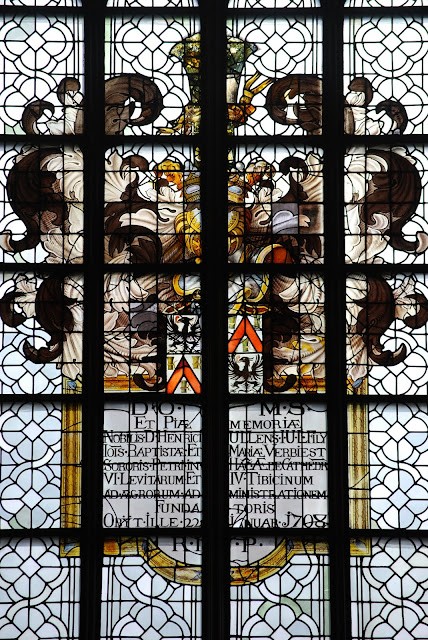 Although it was devoted to Henricus (Henrik, or Henry) Ullens, the caption mentions even more the merit of his uncle, Peter Verbiest. Thanks to the latter’s initiative the Blessed Sacrament could be taken to the ill at home, in the Fortnight’s Anointment of the Sick Procession. This was a triumphant parade, accompanied by six lantern bearers and four trumpet blowers into the bargain.

The Ullens arms would be blazoned: Quarterly: 1 and 4, Argent an eagle displayed sable beaked membered and crowned gules; 2 and 3, Argent a chevron gules between three garbs or.
The one other place in the Cathedral where I saw the Ullens arms without those of the other family we're going to look at next time was on a painted panel accompanying the arms of two different Popes.

(I apologize for the quality of this photograph; the sun was coming into the Cathedral from a window directly above this panel, and there is a lot of washing out from sunglare. Still, you can click on the image above to go to a larger version with more detail.)
The four coats of arms, from left to right, are: Popes: Pope Nicholas V (1447-1455),* Pope Pius IX (1846-1878), Ullens, and Ullens impaling Ullens (these being the arms of an Ullens woman - whose arms are placed on a lozenge shaped shield, with no helmet - who married an Ullens man).
* It is possible, of course, that these are simply meant to be the arms of the Papacy, and not those of any specific Pope.
Posted by David B. Appleton at 2:00 AM