The Second of Two Families

In this post, we're going to look at the quartered arms of the other family whose arms are seen with those of the Ullens (the first family we looked in the previous post) in the windows of the Cathedral of Our Lady in Antwerp: the Geelhands.

In the center of this window, below the images of St. Eugenius, St. Mary, and St. Francisca Romana, surmounted by a coronet, we see the arms of van Delft impaling Geelhand. Seen better in the next photo is the van Delft motto on a scroll beneath the sheild: Fortiter et recta (Boldly and rightly).
Below those arms is an inscription noting the names of the donors, Baron Eugène Louis van Delft d’Eyssel and his wife, Françoise Marie Joséphine Geelhand de Merxem.
Eugène Louis van Delft d’Eyssel (1815-1877) was the son of Louis-Balthazar van Delft (1780-1853) and of Hélène van der Aa de Randerode (1784-1828).
He married Françoise Marie Joséphine Geelhand de Merxem (1799-1875), daughter of Henri Joseph Geelhand de Merxem (1760-1819) and Catherine Reine Constance Joséphine Mols (1766-1804). The couple remained childless.* 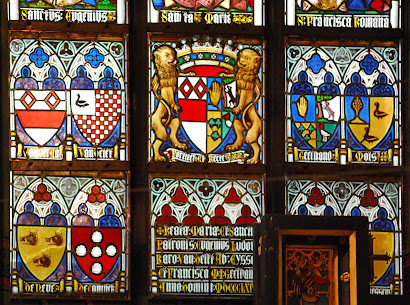 In the top row of shields, we have, from left to right: van Delft and van der Aa, the husband's parents; van Delft impaling Geelhand, the couple's marshaled arms; and Geelhand and Mols, the wife's parents. (Please note that the first two coats have their attributions reversed; van Delft is labeled van der Aa, and vice versa.)
In the bottom row of shields (which I can only assume are further relatives, perhaps the female grandparents of each of the couple)**, we can only see the two on the left: de Neuf and de Coninck.
The two shields on the right are hidden from our view at this angle. Had I noticed that while I was still there, I would have tried to get a different angle, but I didn't, so we're stuck with this.
* I could make some snark here about how the fact that they were childless perhaps helped them to have sufficient monies available to be able to donate this window to the cathedral, but that would be mean, and should be beneath me, so I'm not going to do it here.
** Louis-Balthazar van Delft's mother, the paternal grandmother of the window's donor, was Marie-Jacqueline van Neuf. I'm not certain about de Coninck. The genealogical records I can find on-line are not particularly helpful. It doesn't help that there are a lot of 18th Century van Delfts to try to keep sorted!
Posted by David B. Appleton at 2:00 AM