A recent (September 12, 2020) post on The History Blog remarks on the discovery (back in April 2019) of the silver armorial seal matrix dating back to the late 13th or early 14th Century. 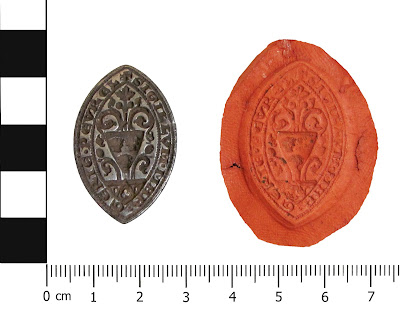 The seal matrix is remarkable because its owner was a woman who is named in the inscription. As the post notes, seal matrices are not uncommon, but those with inscriptions naming a specific individual are more rare, ones that name a woman are "vanishingly rare", and those that are found in a context directly connected with the female owner "can be counted on the finger of one finger."
This particular seal matrix was discovered on the grounds of the Henley Business School in Hambledon, Buckinghamshire, and bears as its central motif a shield of Three garbs, two and one (that is, three bound sheaves of wheat, two in chief and one in base) surrounded by the legend: SIGILLUM * MAR * GERIE * PEVREL (the seal of Margerie Pevrel or Peverell).
The Henley Business School sits on what used to be the estate of Yewden Manor, owned by the Peverells from 1248 to the mid-1300s.
The Peverell coat of arms was Azure three garbs argent banded gules, often with a chief argent, which does not appear on the matrix here.
There are two strong possible identifications of the owner of this matrix. One is Margaret of Cornwall, the wife of James Peverell, d. 1349. The other is her granddaughter, Margaret Peverell, the daughter of Hugh Peverell IV, b. 1321. Both of them lived at Yewden Manor, where the matrix was found.
You can learn a little more about this rare find and see more pictures of the front, side, and back of the seal matrix, on The History Blog at: http://www.thehistoryblog.com/archives/59556
Posted by David B. Appleton at 2:00 AM