I swear, I learn so much history in researching these armorial stained glass windows. Even when I'm left with a few questions, or even one question (as in this window today), there is so much more that I have learned that to focus on the question just seems like a minor quibble.
Anyway, today we're going to look at an armorial window which, like the one we saw a few posts back, has no inscription telling us who the donor was. 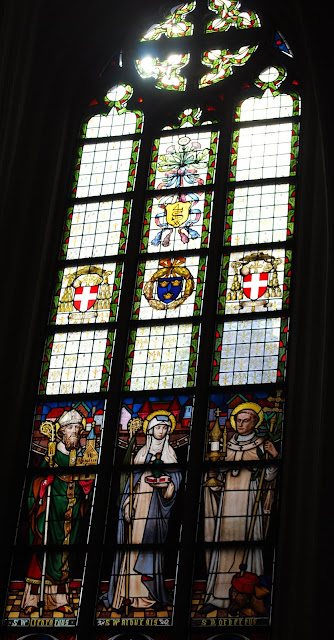 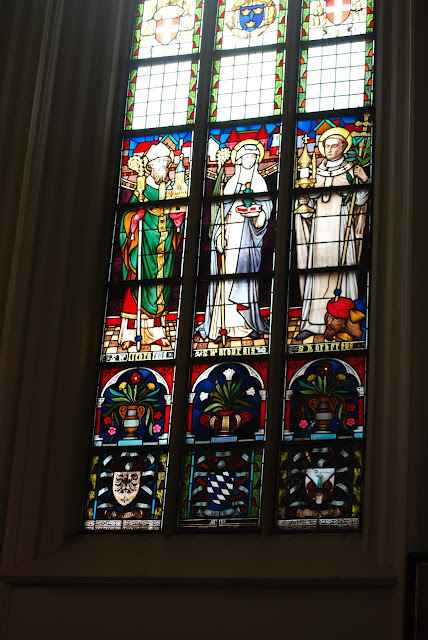 The three saints are, from left to right: St. Willibrord, St. Walburga (or Walpurga), St. Norbert of Xanten

St. Willibrord was "Apostle to the Frisians" in the Netherlands and the first Bishop of Utrecht. He died in Echternach, in what is now Luxembourg, in 739.

St. Walpurga died in Heidenheim, Bavaria, in what is now Germany, in 777 or 779. In Finland, Sweden, and Bavaria, her feast day commemorates the transfer of her relics on 1 May from Heidenheim to Eichstätt. She is the patroness of Eichstätt and Weilburg, Germany; Oudenarde, Veurne, Antwerp, Belgium; and Zutphen the Netherlands.

St. Norbert, called the "Apostle of Antwerp" for his success in combatting a eucharistic heresy in Antwerp proposed by one Tanchelm, died in 1134 in Magdeburg in what is now Germany. He preached throughout lands in what is now western Germany, Belgium, the Netherlands and northern France.
So, with that as background information, let us try to identify the heraldry contained in the window. 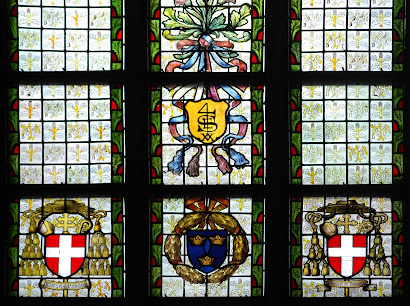 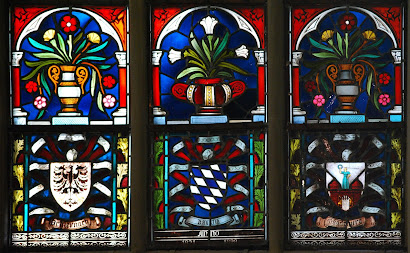 The bottom row of arms are, again, from left to right, and clearly relating to the saint above each one: Echternach, Luxembourg (where St. Willibrord died); Bavaria (where St. Walpurga/Walburga died); and Magdeburg, now in Germany, where St. Norbert died.

So, having identified all of these shields, the one question remaining (that "minor quibble" I spoke of above, is: does Azure three crowns or here represent Sweden, or as the attributed arms of King Arthur, does it represent England, where St. Walpurga was born? I suspect it was meant to be the latter, but I can equally argue for the former.
So there you have it! A minor quibble about one of six coats of arms on a lovely armorial stained glass window dedicated to three saints, all of whom had a meaningful connection to Antwerp. Plus, we've all learned a little ecclesiastical history, to boot!
Posted by David B. Appleton at 2:00 AM