Geelhand and Ullens: Two Families Together, The Final Part

This will be our final stops for the arms of the Geelhand and Ullens families, I promise!
For our first stop, we have yet another window donated to the Cathedral of Our Lady, in Antwerp, Belgium, by the same donors as the last two windows we have looked at: Jacob Ullens and his wife Clementia Geelhand. 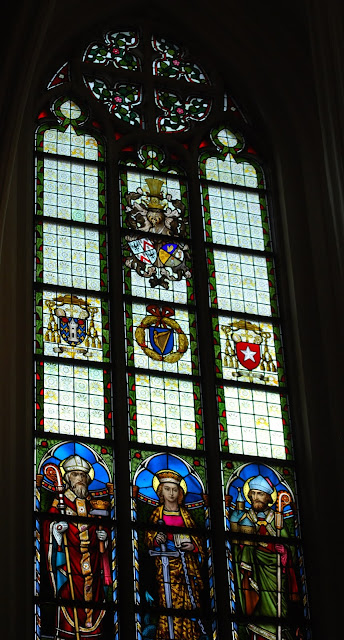 That photo is not the best one, but the angle was a little weird, and was the best I could do to get as much of the window as possible.

This shot is a better view of the three central figures, St. Eligius (Eloi), St. Dympha, and St. Amand, between two rows of coats of arms that relate to them. 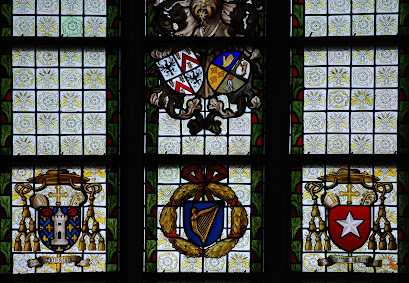 In the upper portion of the window, we have the arms of the two donors, Jacob Ullens and Clementia Geelhand, placed side-by-side, surmounted with a helm from which the crest of the Ullens, A garb or banded vert issues from the coronet of a marquis.
Of the coats of arms above the the three saints, we have, from left to right, the arms of:
Tornacum (Diocese of Tournai, Belgium, where St. Eligius (Eloi) was bishop, 641-660);
Ireland (where St. Dymphna was born in the 7th Century); and
Maastricht, The Netherlands (St. Amand was bishop of Maastricht, 647-650). 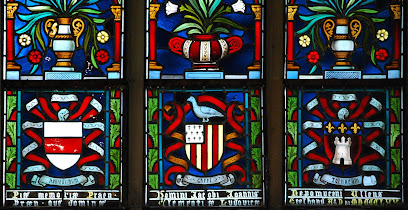 Below the three saints, we have three more coats of arms relating this time to their deaths. From left to right we find the arms of:
Noviodunum (Noviodunum is a name of Celtic origin, meaning "new fort"), now Noyon, France (where St. Eligius died, December 1, 660);
Gheel, or Geel, Belgium (where St. Dymphna was martyred to protect her chastity in the 7th century); and
Tornacum, now Tournai, Belgium (St. Amand died in 679 in Saint-Amand-les-Eaux, near Tournai).
And now we go to our final photograph with the arms of Ullens and Geelhand:

This is, alas, another painted wooden panel underneath that row of windows with the sun shining in, and giving my digital camera a little sun flare that washes out the image a bit on the right.
Nonetheless, and as always, you can click on the image above to see a larger, more detailed one, in this row of four coats of arms, the first two on the left are essentially merchants marks, followed by Ullens (surmounted by a helm and the Ullens crest of A garb or banded vert, and Ullens impaling Geelhand. This last, being on a lozenge, is presumably for the wife of the Ullens in the third panel here.
Anyway, it's been fun, compiling - and sharing with you - all of the depictions of the coats of arms of these two significant Antwerp families. I can only hope that you have found it at least a little bit educational as well as entertaining.
Next time, somebody else!
Posted by David B. Appleton at 2:00 AM

Email ThisBlogThis!Share to TwitterShare to FacebookShare to Pinterest
Labels: Belgium, France, The Netherlands