Our next armorial stained glass window doesn't have quite as much heraldry in it as the last one, but is well worth looking at on its own. 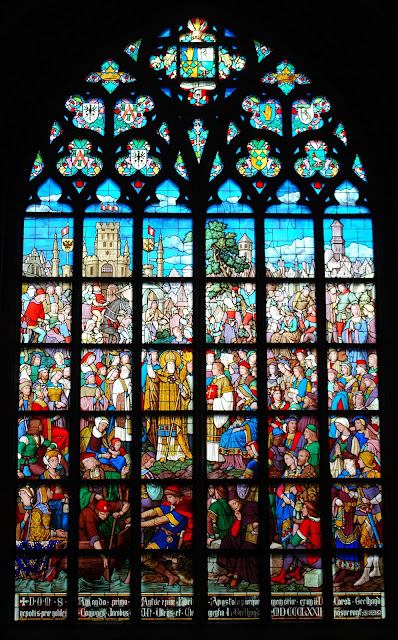 In the main scene of this window, created by Edouard Didron in 1872, Saint Amandus preaches in Antwerp. The pioneering missionary work of this Frank in Flanders, Brabant, and Maastricht took place in the 7th century, so in the images here there is no lack of anachronisms. In the background there is Saint Michael’s Abbey (founded only in 1124). The citizens’ clothes are 15th century, and an (early Medieval) missionary, even though he was a bishop, would never have walked around in his liturgical vestment, let alone a Gothic one. Flying from the castle are several flags, Gules a hand couped appaumy argent, which appear in the arms of the city and Margraviate of Antwerp. Flanking the tower of the castle are two shields, that on the left the arms of the Holy Roman Empire, Or a double-headed eagle displayed sable, and on the right quartered arms that may be Brabant and Flanders quarterly, Sable four lions rampant or. They are there, in any event, to make the location clear to the viewer.
Once again, you should click on the image above to see a larger, more detailed photo. There is a lot of detail in this window that you will miss if you only look at the smaller picture above.
The window has an inscription at the bottom which states that it is in the memory of Charles Geelhand, and was donated by Jacob Ullens and his wife Clementia Geelhand.
At the top of the window we see the achievement of arms of Geelhand, as well as the separated quarters of the arms of Ullens and Geelhand. 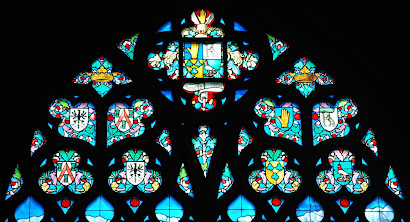 The shield of the Geelhand arms are surmounted by a barred helm with the crest A hand couped appaumy or between a pair of wings displayed argent. Beneath the shield is the Geelhand motto, Animo et fortitudine (Inspired and strengthened). Flanking the shield on each side is the coronet of a marquis.
The really fun part of this display of heraldry comes immediately below the coronets, where on the left you have the four quarters of the arms of Ullens, each on its own shield, and on the right, the four quarters of the arms of Geelhand, each on its own shield! (Here, too, you should click to see the larger image. It's a lot more impressive.)
This is not a form of armorial display that I recall seeing before (except perhaps in some memorial boards or hatchments where the arms of the various grandparents and great-grandparents are displayed), but I find it really attractive. Don't you?
Posted by David B. Appleton at 2:00 AM