Well, this may take a little longer than I had originally supposed. I've been looking in greater detail at the images I have from the Cathedral of Our Lady in Antwerp, and it looks like it's going to take more than two posts to review all of the photos with the arms of both the Geelhand and the Ullens families.
Now, you'll remember the arms of the Ullens family from our next to last post, and those of the Geelhand family from our last post. Now, we're going to look at those armorial stained glass windows and painted panels that contain the arms of both of those two families. 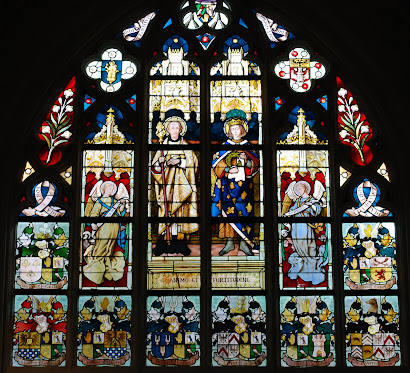 This stained glass window, designed by Pieter van der Ouderaa and executed by August Stalins and Alphonse Janssens in 1881, was a present of the Geelhand family to commemorate canon Christiaan Geelhand (died 1731). Underneath the traditional name saints, Saint Christian and Saint Louis, his motto is Animo et Fortitudine (Inspired and strengthened). 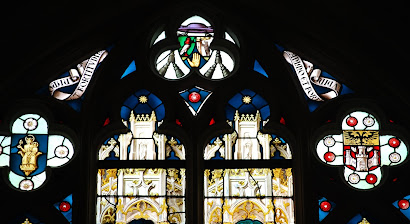 At the peak of the window, surmounted by a purple galero with three tassels on each side, are the arms of Christiaan Geelhand. (Note the tripartite division of the shield, as opposed to the later quarterings of the Geelhand family.)
The arms here are flanked on each side with a scroll containing his motto Animo et Fortitudine. Flanking those, are the arms of the Chapter of the Cathedral of Our Lady (which we have seen before), and the arms of the Margraviate of Antwerp (which we have seen many times before).

At the bottom of the window are two rows containing pairs of coats of arms (presumably representing married couples, relatives of the Canon. (Again, here I recommend clicking on the image above to see a larger and more detailed photograph of this part of the window.)
The top row, from left to right, has the heraldry of van Praet and Geelhand; and Geelhand and Guyot. (The arms of van Praet appear make up the third quarter of the arms of Geelhand everywhere but in the shield at the peak of this window. Presumably, that marriage is when the van Praet arms were brought into the family coat.)