Continuing our meandering path through Canterbury Cathedral, we came across these two armorial memorials in the floor, related because the wife of the one bears the same arms as the husband in the second.

The first is a memorial to Thomas Hill and his wife, Matilda (Elstob) Hill: 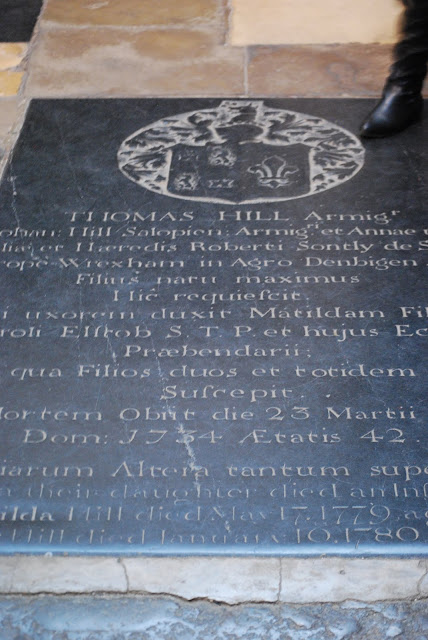 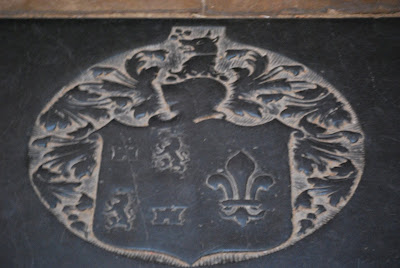 The marshaled arms of Thomas and Matilda Hill are blazoned: Quarterly: 1 and 4, Ermine on a fess sable a castle triple-towered argent (Hill); 2 and 3, Ermine a lion rampant sable (Sonlly); impaled by Per pale gules and vert a fleur-de-lis argent (Elstob). Crest: A wolf’s head erased azure holding in its mouth a trefoil slipped vert. (The blazon of the crest comes from Fairbairn's Crests; I don’t know where Humphrey-Smith in his Alphabetical Catalogue of Coats of Arms in Canterbury Cathedral found the “overlaid with two bars” on the wolf’s head he blazons there.)

There is a coat of arms found in Bolton’s American Armory in use by a Hill (Ermine on a fess sable a two-towered castle proper), but the crest is entirely different (Issuant from a tower two branches erect).

I do not find the "Sontly" inscribed on the memorial in any of the general references. I suspect that “Sontly de Sontly” is an error for “Sonlly”. (Well, unless the “Sonlly” in Burke’s General Armory is an error for “Sontly”. I mean, it's not like Burke's doesn't also contain errors.)

Charles Elstob, the father of Matilda (Estob) Hill of the previous memorial: 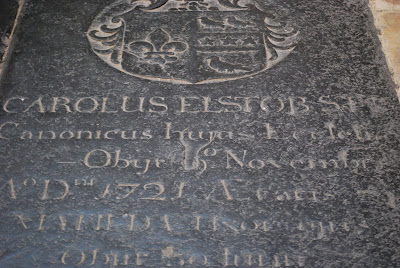 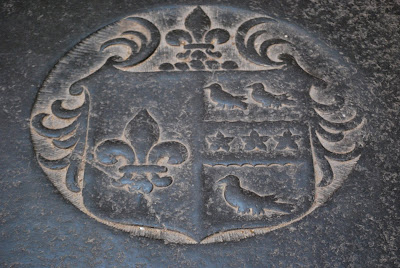 The blazon of the marshaled arms here is: Per pale gules and vert a fleur-de-lis argent (Elstob); impaled by Argent on a fess engrailed gules between three martlets sable three cinquefoils argent (Payne). Crest: A fleur-de-lis [argent].

Charles Elstob was Prebendary of Canterbury from 1685-1721. His will, probated March 5, 1722, is in the National Archives, Kew. He is less well-known than his niece and nephew, of whom he had guardianship, Elizabeth Elstob (1683-1756), the Anglo-Saxon scholar, and William Elstob (1673-1715), cleric, both of whom have their own entries in the Dictionary of National Biography. Indeed, most of the information available on the internet about Charles Elstob is in his relationship to his niece and nephew.