Our next Thornhurst memorial in St. Michael's Chapel, Canterbury Cathedral, has the carved figures of both husband and wife, Sir Stephen Thornhurst, the fourth husband of Mary (Giffard) Baker Fletcher Thornhurst. Yes, she was married three times. 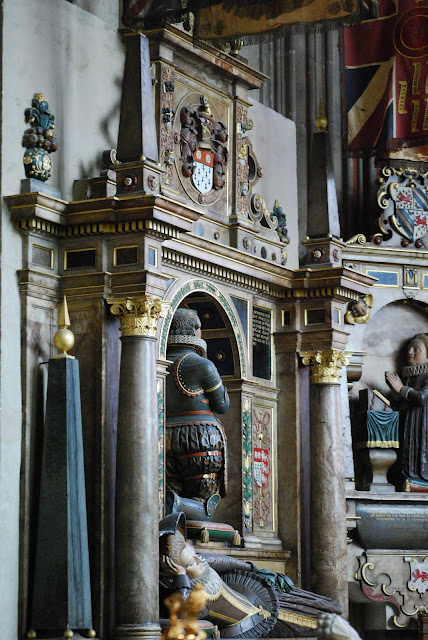 The kneeling man in this memorial is said to be, on the website of the Canterbury Historical and Archaeological Society, but is in fact not, Sir Richard Baker, MP (1527-1594), who died in Cranbrook, Kent, and is buried at St. Dunstan's Church there.

The figure here is that of Mary's third husband, Sir Stephen Thornhurst, d. 1616.

His second wife, the reclining figure just below him, resting her head on her right hand (in what is often called the "toothache" position, is Mary (Giffard) Thornhurst, d. 1609.

There are more coats of arms on the memorial than I could see from the entrance, but there are two that can be seen in the photograph above. (The coat of arms between the left-hand pillar and Sir Stephen, seen in a photo found on-line at http://www.canterbury-archaeology.org.uk/warrior/4590809738, are the arms of Giffard on a lozenge; that is, Mary Giffard (Giffard) Thornhurst's paternal arms.)

The lower of the two arms that can be seen in my photos here, between the effigy of Sir Stephen Thornhurst and the pillar to the right, are the marital arms of Sir Stephen and Mary: Ermine on a chief gules two leopard's faces argent (Thornhurst), impaled by Gules three lions passant in pale argent (Giffard).

At the top of the monument is another, larger depiction of the Thornhurst arms and crest, similar to the that on the monument to Sir Thomas Thornhurst we saw in my last post. 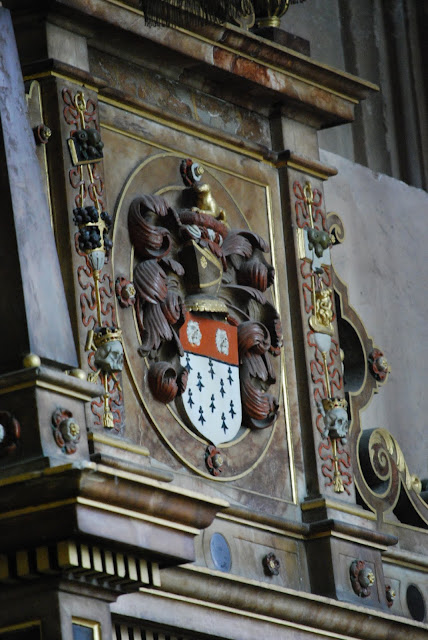 Again, the Thornhurst arms are Ermine on a chief gules two leopard's faces argent, and the crest is A greyhound couchant or.

Here, too, the memorial is a credit to the stonecarver's art, as well as being a nice display of heraldry.