The Coronation(s) Window in Canterbury Cathedral


Yes, I know that they named it the "Coronation Window", but really, considering that it contains the principal parties for two different coronations, shouldn't it really be called the "Coronations Window"? 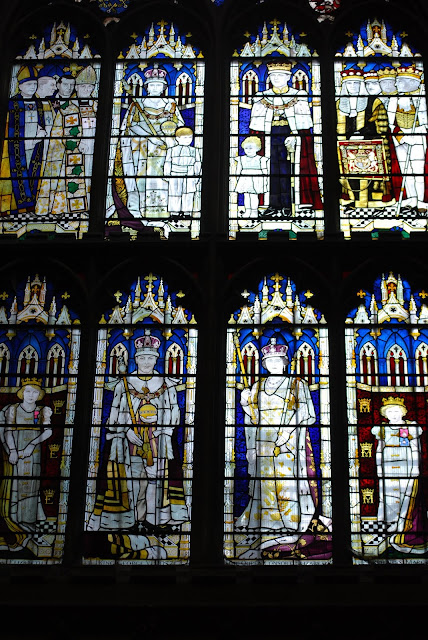 As you can see in the photograph above, the lower register windows portray the figures of the 1937 coronation of King George VI (center left) with his Queen, Elizabeth (the late Queen Mother), and Princess Elizabeth (far left), now Queen Elizabeth II, and the late Princess Margaret (far right).

The upper register windows show the figures of the 1953 Coronation of Elizabeth II (center left) and Prince Philip, with their two children at the time, Prince Charles and Princess Anne. In the far left window, we have the four Lords Spiritual: the Archbishop of Canterbury, Geoffrey Fisher, the Archbishop of York, and the Bishops of London and Winchester. The far right window portrays the four Lords Temporal: the Lord Chancellor, the Lord Great Chamberlain, the Lord High Chamberlain, and the Earl Marshall.

Also in that far right window is a banner of the achievement of the Royal Arms of Great Britain and Northern Ireland.

At the very peak of the window, just above the portion of the window showing the Annunciation, is another depiction of the Royal Arms, Quarterly: 1 and 4, England; 2, Scotland; and 3, Ireland, surmounted by a crown. 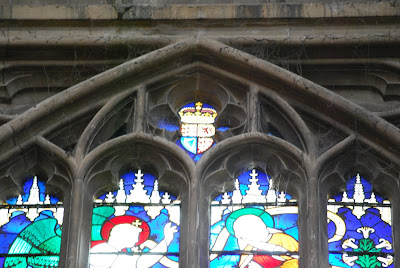 And finally, in between the upper register of windows and the upper part of the window we find two Royal badges and three coats of arms: 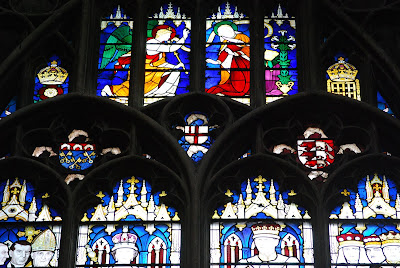 The Royal badges are a crowned Tudor rose, and a crowned portcullis.

The coats of arms are, from left to right:

The Salt-Fishmongers Company, Azure three pairs of keys crossed in saltire or on a chief gules three dolphins embowed argent.

The City of London, Argent a cross and in dexter chief a sword gules.

The window was originally donated by John Barnewell (d. 1478), the London merchant who provided the priory with salt fish.

If you look carefully (you can click on the image above to see a larger photo), you can see that the dolphins on the chief of the Salt-Fishmongers Company also surround each of the three shields.

It's a beautiful piece of stained glass work; the two coronations by Sir Ninian Comper are a 1953 replacement of the 19th Century glass which was destroyed during World War II.

And, of course, the heraldry in it is nice to see, too!