In our post of September 23, we saw the arms of Priscilla Fotherby, marshaling those of her husband, William Kingsley.

Today, we look at the memorial with the arms of two different Thomas Fotherbys; one of them Priscilla's parents, Thomas and Elizabeth (Moyle) Fotherby.

Regarding the first Thomas Fotherby, annoyingly, the two photos I took of this floor slab were both badly blurred. (I always take at least two pictures of everything, because often enough, one of them is blurry. Here, apparently, I should have taken a third.)

Hic requiesunt cineres Dni Thomae Fotherby qui Thomae filius Martini nepos Episcopi Sarisbesiumsis. [Followed by a long, but alas, entirely unreadable in my photos, inscription all in Latin.] I did, however, manage to get an in-focus photo of the arms on the memorial: 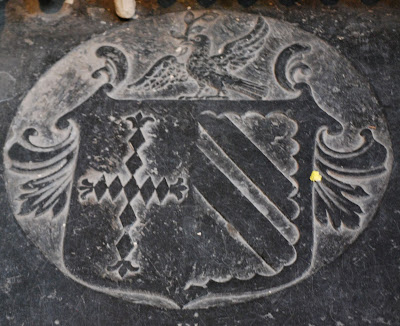 These arms are blazoned: Gules a cross of nine lozenges at each end a fleur-de-lis or (Fotherby); impaled by Argent two bendlets azure within a bordure engrailed sable (Hamon).

The crest is A falcon wings expanded proper beaked or holding in its mouth an acorn or leaved vert.

For our next memorial with the Fotherby coat of arms, we have: 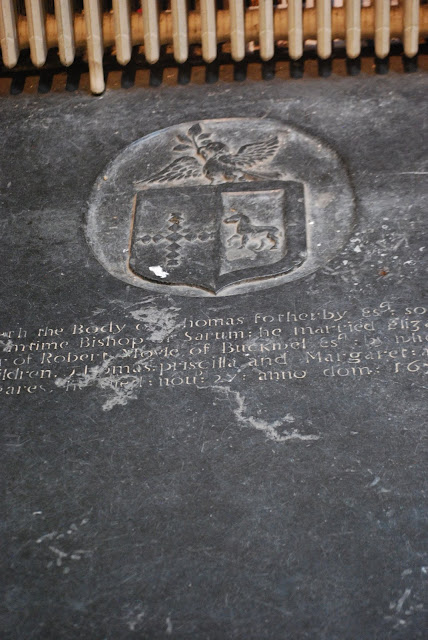 Martin Fotherby, S.T.P., Thomas’ father, was Canon of Canterbury 1596 and subsequently Bishop of Sarum. He died in 1619 and was buried in the Church of All Hallows, Lombard St. London where his monument was burnt with the church in the fire of 1666.

Among his three children mentioned is, of course, Priscilla, who married William Kingsley, and whose memorial we have seen before. 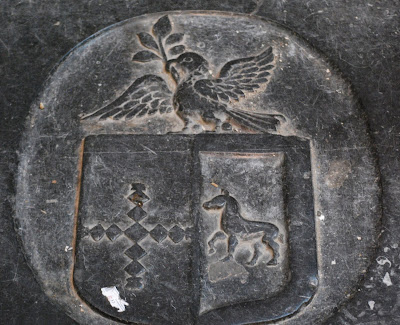 Gules a cross of nine lozenges at each end a fleur-de-lis or (Fotherby); impaled by Gules a mule passant within a bordure argent (Moyle).

The crest, once again, is A falcon wings expanded proper beaked or holding in its mouth an acorn or leaved vert.

The Moyle arms are, of course, canting; that is, they are a play on the name “Moyle” by having the primary charge of a “mule”.

Not everyone, not even all heraldic authors, share my enjoyment of cleverly done canting arms. Regarding "armes parlantes" or canting arms, James Dallaway, in his Inquiries into the Origin and Progress of the Science of Heraldry in England, 1793, p. 275, wrote:

Wriothesley and Barker abstained in a great measure from this practice in the concessions of arms which were made by them; but so congenial was it with the taste of king James and the fashions which he patronised, that many bearings of this description were assumed during his frivolous reign, some of which have been subsequently confirmed to their families by the college of heralds. Some respect may be due to the few instances of high antiquity, but they should be generally considered as of easy and vulgar application, and very widely deviating from the chast[e]ness and simplicity of pure heraldry.

Needless to say, I disagree. I find well-done canting arms to be appealing, but what do I know? (By way of full disclosure, my own coat of arms is a partial cant on my surname.)