An Officer and a Gentleman, Who Is Also a Field Marshal and an Earl


Our next armorial memorial is one erected by his friends to Field Marshal Sir John Denton Pinkstone French, Earl of Ypres. 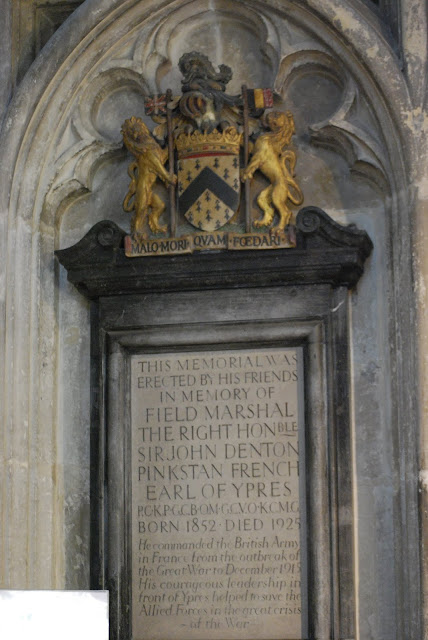 A somewhat controversial figure over the course of his career, he entered WWI as basically a cavalry officer used to thinking of movement who found himself in a stagnant war of entrenchments. But go to his Wikipedia article (https://en.wikipedia.org/wiki/John_French,_1st_Earl_of_Ypres) to get a better feel for the ups and downs of his career, as well as his strengths and his weaknesses. 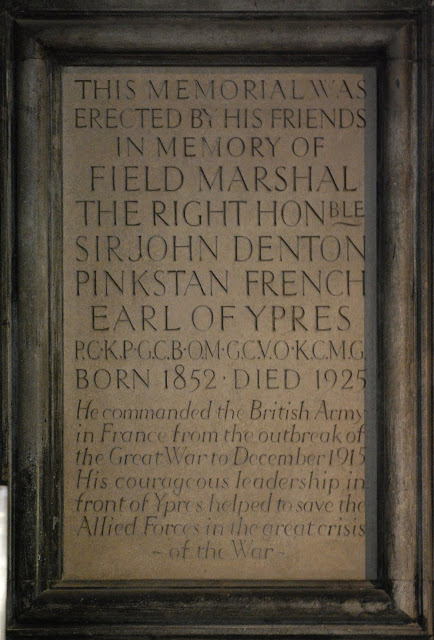 The plaque on his memorial reads in full:


erected by his friends
in memory of
The Right Honble
Sir John Denton
Pinkstan French
Earl of Ypres
P.C.K. G.C.B. O.M. G.C.V.O. C.M.G.
Born 1852 – Died 1925
He commanded the British Army
in France from the outbreak of
the Great War to December 1915
His courageous leadership in
front of Ypres helped to save the
Allied Forces in the great crisis
~ of the War ~

Not sure how well his friends here really knew him, since they seem to have gotten his third name incorrectly. Burke’s Peerage and Baronetage (1938), gives his name as John Denton Pinkstone French, 1st Earl of Ypres (created 5 June 1922), Viscount French of Ypres and of High Lake, county Roscommon (created 1 January 1916). 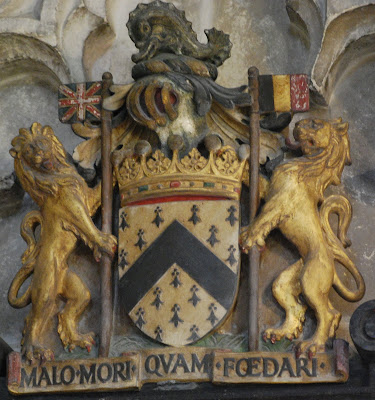 His arms are blazoned: Ermine a chevron sable [a crescent for difference] (which crescent does not appear on his achievement here). The shield is surmounted by an earl’s coronet. The crest is: A dolphin embowed proper (that is, vert detailed gules). The supporters to his shield are: Dexter, A lion guardant or supporting a staff proper with a banner of the Union; Sinister, A lion or supporting a staff proper with a banner paly of three sable or and gules. (In simpler terms, his supporters are the British lion holding the Union flag and the Belgian lion holding the Belgian flag.) The motto scroll, which doubles for the compartment, reads: Malo mori quam fœdari (Death rather than disgrace).