So there I was, just living my life and minding my own business, when I noticed that someone had made a comment on an old blog post I had written way back on March 13, 2009 (during the first year of this blog!) entitled “Good Movie Heraldry.” The post (https://blog.appletonstudios.com/2009/03/good-movie-heraldry.html) was about the heraldry in Kenneth Branagh’s Henry V, which was actually pretty well done.

But in February 2019 (so a full ten years after I had written that post!) a commenter asked the following question and then stated:

Has the film "THE WARRIORS" with Errol Flynn and Peter Finch ever been discussed here? Sir John Chandos is even a character as well as Bertrand du Guesclin both with fairly accurate Heraldry.


I allowed as how The Warriors had indeed not been discussed on the blog, and then went out on the web to find a copy to see for myself. It arrived in the mail a short time later, and I popped it into the DVD machine, and hit “Play.” And sure enough, though there are a few coats of arms in it about which I have some question, a lot of the heraldry in the movie is well done, accurate to the historical person bearing it, and lovely to watch. As only a few examples, we have the arms of:

Lady Joan Holland (the Fair Maid of Kent, who later married the Prince of Wales as her third husband and gave birth to King Richard II) is seen under a banner of the arms of her father, Edmund of Woodstock, 1st Earl of Kent, England [Gules three lions passant gardant in pale or] within a bordure argent.

Bertrand du Guesclin bore the arms of Bertrand du Guesclin, Argent a double-headed eagle displayed sable debruised by a bendlet gules. I couldn't find a still from the movie that shows his arms, but here is a drawing of his coat of arms from Wikimedia: 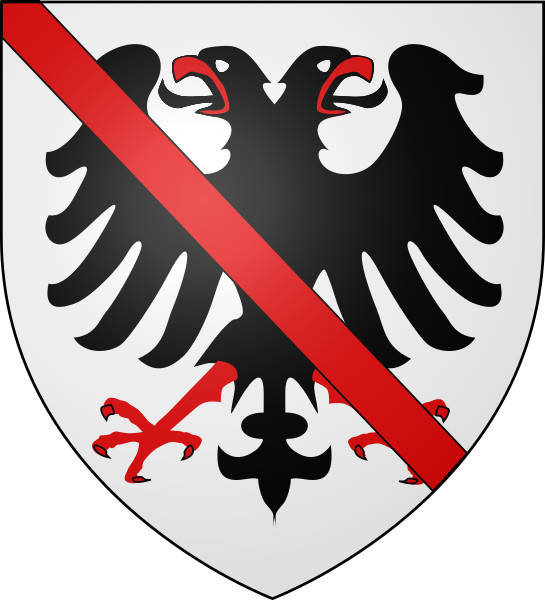 "Sir John" (played by Rupert Davies, below, left) wears the arms of Sir John Chandos, Or a pile gules.

Another knight (the cast list often gives only the given name for the knights in the cast, e.g., Sir Bruce, Sir Philip, or as above, Sir John, etc.) bears the arms of Hartland/Hertelond (below, left), Argent on a bend sable three stag's heads cabossed or. 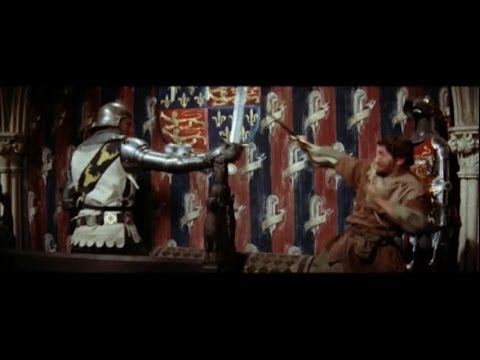 Yet another knight wears the arms of Berkeley, Gules a chevron between ten crosses patty argent.

And those are just the ones I've taken the time to identify so far.

However, and leaving all of those good examples aside, I do have some questions about some of the heraldry in the film. As the primary example, the arms of Robert, Comte de Ville, Quarterly, 1 and 4, Azure semy-de-lys argent, 2 and 3, Checky argent and sable [or, sometimes, Checky sable and argent]. They seem a little complex for this period of time, and I've not found any arms borne by a de Ville that match the coat borne in this movie. 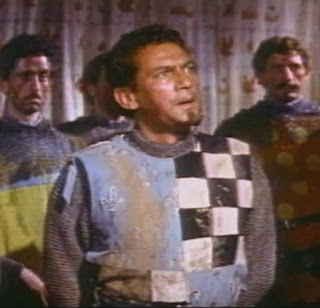 Still, for all that's it's a movie with a so-so plot featuring an aging actor as our erstwhile hero, and even allowing for some potentially questionable heraldry, there is a lot of great, and accurate, heraldry to be seen: on shields, on tabards, on jupons, on banners, and on horse barding.

If you like seeing good heraldry in the movies, I can recommend The Warriors (originally entitled The Dark Avenger) as one such example.

And if you would like to see a review of the movie as a whole, and not just the heraldry, my alter ego Da'ud Bob ibn Briggs has one which will be available all this month (May 2019) at http://www.appletonstudios.com/movies2.htm