A Final Heraldic Memorial at St. Paul's Without the Walls, Canterbury


Our last heraldic memorial in the historic (there has been a church on this site since the 12th Century!) church of St. Paul's Without the Walls is this two-piece one: 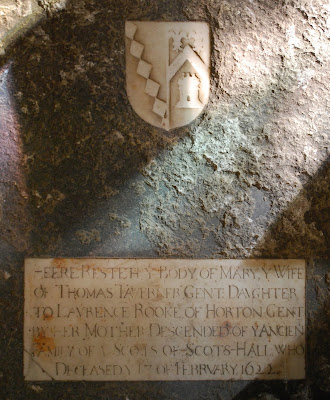 And, of course, it was the shield bearing a marshaled coat of arms that really attracted my attention: 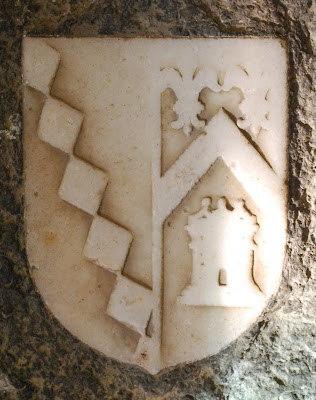 Burke’s General Armory gives us: Taverner (Hoxton, co. Hertford, and co. Kent; granted 1575, and by patent 1604). Argent a bend lozengy sable in sinister chief a torteau. (There is no torteau, a red roundel, on the shield here.)

I do not find the paternal (Rooke) arms in Burke; most of the Rook, Rooke, and Rookes families there which bear a chevron do so between three chessrooks (https://commons.wikimedia.org/wiki/Category:Chess-rooks_in_heraldry), while the one here has a chevron between two fleurs-de-lis and a tower.

According to Burke’s General Armory, Scot of Scott’s Hall, county Kent, bore Argent three Catherine wheels sable a bordure engrailed gules (though of course those arms do not appear here, as belonging to her mother).


And, of course, since the arms here are carved but not painted, I have no idea of what the tinctures are supposed to be, making further research more time-consuming.

Nonetheless, it is a nicely carved marital coat of arms, and a fitting memorial to a wife and daughter who passed away nearly 400 years ago.