What Can Happen Heraldically When Cousins Marry


I have posted before with some of the heraldic memorials in St. Martin's Church, Canterbury (e.g., https://blog.appletonstudios.com/2014/11/an-heraldic-conundrum.html).

As a side note, St. Martin's is the oldest parish church in England, having been established in Canterbury in 597 A.D. by Augustine. The building itself, added to over the years, still has some of its original Roman walls visible in the oldest part of the church.

Anyway, having made my way there again on this most recent trip, I stopped to photograph this memorial: 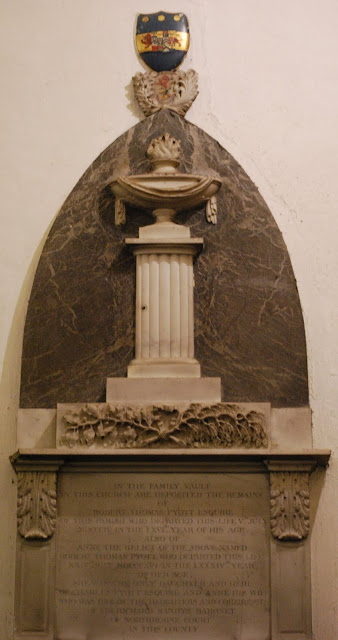 The plaque is inscribed: 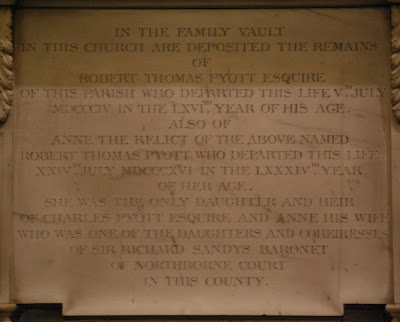 In the family vault
in this Church are deposited the remains
of
Robert Thomas Pyott Esquire
of this Parish who departed this life Vth July
MDCCCIV in the LXVIth year of his age.
Also of
Anne the relict of the above named
Robert Thomas Pyott, who departed this life
XXIVth July MDCCCXVI in the LXXIVth year
of her age.
She was the only daughter and heir
of Charles Pyott Esquire, and Anne his wife
who was one of the daughters and coheiresses
of Sir Richard Sandys Baronet
of Northborne Court
in this County.

(Got all that straight? Anne, daughter and co-heir of Sir Richard Sandys, married Charles Pyott. Their daughter and heir Anne married Robert Thomas Pyott, a cousin, though whether a first cousin, second cousin, or a more distant cousin, I have not been able to determine yet. The most specific information I have found to date is from some old legal records from the Vice-Chancellors' Courts which says that they "were related to each other before their intermarriage.")

Anyway, the result of an heir, daughter of a co-heir, marrying her cousin of the same surname, leads to these two pieces of heraldry: 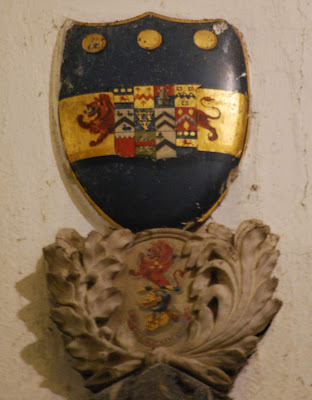 The Pyott crest, here placed below the shield, is A demi-lion rampant gules charged on the shoulder with three bezants one and two.

All in all, a fascinating work of heraldry with a complex history and an even more complex depiction.