More Heraldic Memorials at St. Paul's Without the Walls


Continuing my survey of heraldic memorials in the church of St. Paul's Without the Walls,* a church which has an old (about 425 years old!) family connection, here are two more: 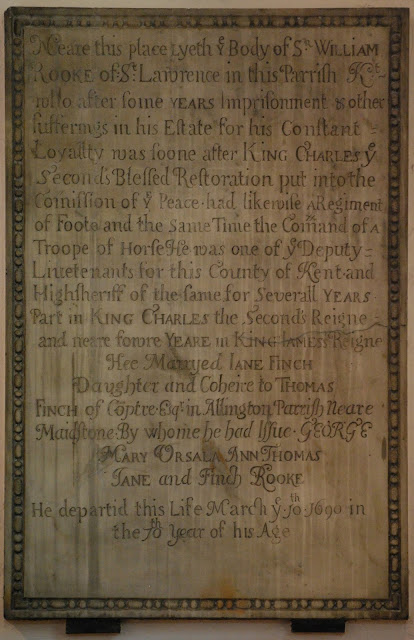 Near this place Lyeth ye Body of Sr William
Rooke of St Lawrence in this Parrish Kt
who after some YEARS Imprisonment & other
sufferings in his Estate for his Constant
Loyalty was soone after King Charles ye
Seconds Blessed Restoration put into the
Commission of ye Peace - had likewise a Regiment
of Foote and the Same Time the Command of a
Troope of Horse. He was one of ye Deputy
Liuetenants for this County of Kent and
Highsheriff of the same for Several YEARS
Part in King CHARLES the Second's Reigne
and neare fowre YEARE in KING IAMES's Reigne
Hee Marryed IANE FINCH
Daughter and Coheire to THOMAS
FINCH of Coptre Esqr in Allington Parrish neare
Maidstone. By whome he had Issue - GEORGE
MARY URSULA ANN THOMAS
JANE and Finch ROOKE
He departid this Life March ye 10th 1690 in
the 70th year of his Age

Above the descriptive plaque on the wall was this carved coat of arms: 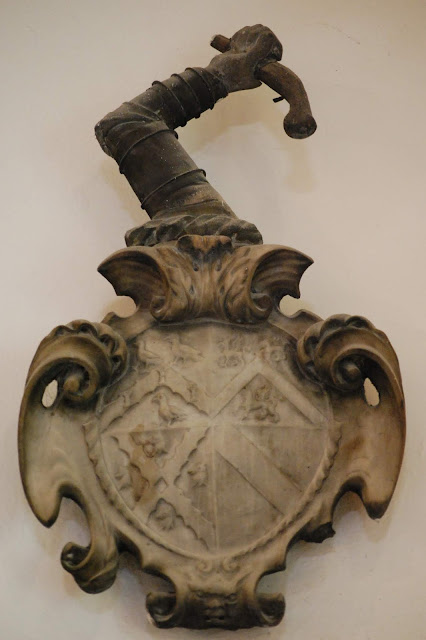 Sir William Rooke of St. Lawrence. Quarterly: 1, Argent on a chevron engrailed between three rooks sable three chess-rooks argent; 2, Argent a chevron between three griffins passant sable (Finch); 3, Argent a saltire engrailed between four bear’s heads erased sable muzzled or (Bettenham); and 4, Azure a bend or (Scrope?). (The blazons for these quarters are taken from the description of the eight quarters on the memorial in Canterbury Cathedral to Vice Admiral (George) Rooke found in An Alphabetical Catalogue of Coats of Arms in Canterbury Cathedral by Cecil R. Humphrey-Smith.) Crest (per Burke's General Armory): An arm embowed in armor proper  garnished or holding in the gauntlet a pistol or [the arm environed with a trumpet argent].

Sir William does not have an entry in the Dictionary of National Biography, and I found only a little genealogical information on the web: Sir William Rooke of St. Lawrence, Canterbury, married Jane (died 1711), daughter and coheir of Thomas Finch of Coptree, Allington, Kent.

Sir William and Jane (Finch) Rooke were the parents of Admiral Sir George Rooke, born 1650, famous for his capture of Gibraltar in 1704. (The Admiral is buried in a vault beneath the organ in the church.)

We then move along to this memorial: 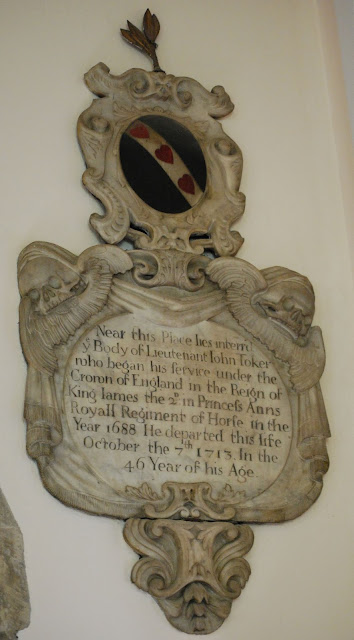 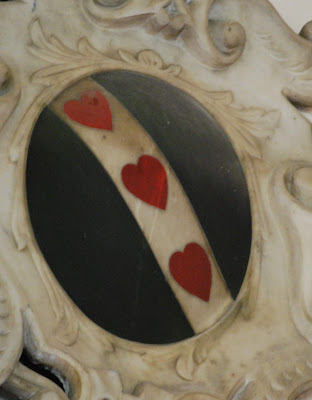 These arms match those in Burke's General Armory for Tooker or Tucker, Vert on a bend engrailed argent three human hearts gules. Crest: A heart gules encircled with a crown or.

I have, alas, found no more information for Lt. Toker beyond what appears on the inscription on the monument: 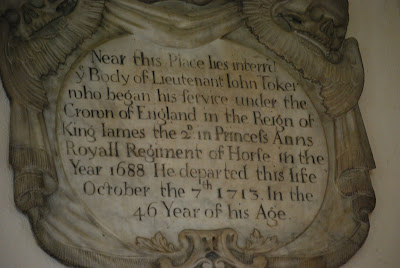 Near this Place lies interr'd
ye Body of Lieutenant Iohn Toker
who began his service under the
Crown of England in the Reign of
King Iames the 2d in Princess Anns
Royall Regiment of Horse in the
Year 1688. He departed this life
October the 7th 1713. In the
46 Year of his Age.


*  The church has walls, but it lies just outside the old city walls of Canterbury, hence the name, without the walls, as opposed to within the walls.