A New Logo That Is Both More and Less Heraldic


A recent article on the website of Punchline-Gloucester.com notes the introduction of a new badge (I would call it a "logo") for the Gloucester City AFC (the Tigers).

The article notes that while the old badge had no visible links to Gloucester, the new one "is full of nods to the heraldry and history of the city," including a city skyline, the date of the club's foundation, the city's coat of arms, and the county's motto.

Here's the old logo, which being contained on a shield, was at least quasi-heraldic:

Placing the words "Gloucester City AFC" on the shield isn't the best heraldic style, but Or a pale sable surmounted by a tiger's face or fimbriated and marked sable has at least some nods to heraldic design.

The new one, however, has what I would call some "issues": 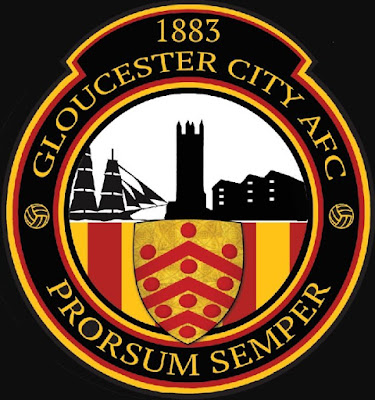 The upper half is a skyline containing a tall ship, the tower of Gloucester Cathedral, and a representation of the Gloucester docks. The lower half is simply Paly of six or and gules, with a shield of the arms of the City of Gloucester (Or three chevronels between ten roundels three three three and one gules) which was granted to the city in 1652 in recognition of its citizens' support of the Parliamentary cause in the Civil War. The legend around the central design adds the date of its formation to the name Gloucester City AFC, along with two footballs, and the motto Prorsum semper (Always forward). The motto is that of the county, Gloucestershire.

So the new badge (logo) is a little more heraldic than the old one, in that it contains an actual coat of arms (though not the arms of the club, but of the city where the club plays), but overall it is a lot less heraldic than the old badge (logo) in that it has become a lot more complex with the addition of even more words, a skyline, footballs, and the red and gold stripes in the bottom.

All in all, I'm not sure it's really an improvement on the old one. But you can see why I consider it to be both more and less heraldic.

If you're interested in reading more about this new badge (logo), you can find this article on the website of Punchline-Gloucester.com at https://www.punchline-gloucester.com/articles/aanews/new-look-new-badge-and-new-colours-for-gloucester-city-football-club