This Monument Shouldn't Be A Mystery


This man memorialized in the next monument in St. Michael's Church, Linlithgow, Scotland, shouldn't be a mystery, or hard to find, and yet .... 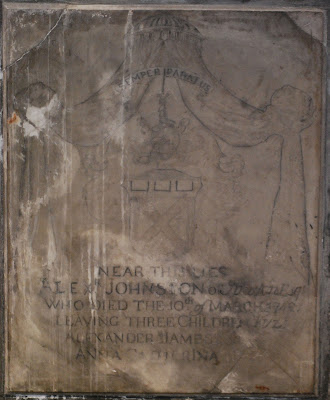 I mean, it is inscribed with his name and date of death:


Near this lies
Alexr Johnston of [this placename is hard to make out], Esqr.
Who died the 10th of March 1742
Leaving three children, viz.
Alexander James
Anna Catherina

And it has his coat of arms, crest, and motto carved into its face (with hatching, making it easy to determine the appropriate tinctures): 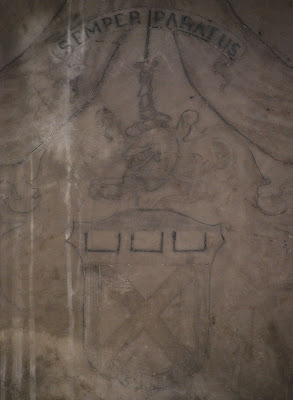 Argent a saltire sable on a chief gules three cushions argent a bordure also gules, with the crest An arm in armor holding in the glove a sword erect [all proper, according to Fairbairn's], and the motto Semper paratus (Always ready).

So what's the difficulty?

I cannot find these arms listed anywhere. They are, naturally enough, a variant of many Johnston/Johnstone arms, Argent a saltire sable on a chief [sometimes sable, sometimes gules] three cushions argent, with the addition of a bordure gules, presumably as a difference. Yet the arms on this monument do not appear in either volume of An Ordinary of Arms Contained in the Public Register of All Arms and Bearings in Scotland, nor do I find them in An Ordinary of Scottish Arms from Original Pre-1672 Manuscripts, and they do not appear in any Johnston/Johnstone entries in Burke's General Armory. The coat does not even appear in the 1905 book The Heraldry of the Johnstons (the link to which - https://archive.org/stream/heraldryofjohnst1905john#page/n0/mode/2up - was kindly sent to me by reader and friend Margaret Sainte Claire.)

Fairbairn's Crests cites this crest and motto and assigns it to Johnston of Straiton, but "Straiton" does not seem to quite match the placename as carved on the monument (which I can only partially decipher: I'm not certain that the first letter is an "S", though the second one looks like an "o" or maybe an "a", then there appears to be a space that might or might not be a letter, followed by a "u", and ending possibly with "ton"; in any case, the last letter is clearly an "n").

As a consequence of all this, I do not know who this Alexander Johnston is; I do not know how, or even if, he is related to Johnston of Straiton (the majority of Johnstons in Burke's and Fairbairn's use different crests and mottoes from the ones carved here); and so I find myself left with a bit of a mystery that really shouldn't be a mystery, because most of the information necessary to identifying him is right here on his memorial. So why can't I find him?