It's not just old heraldic monuments in these churches in Scotland; sometimes, you may run across a much more recent one. 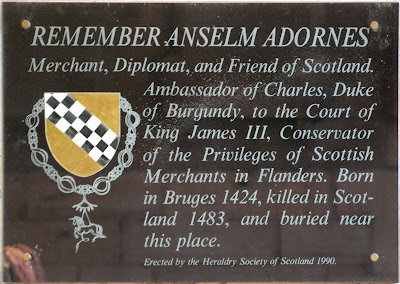 This heraldic plaque was erected in St. Michael's Church, Linlithgow, in 1990.


REMEMBER ANSELM ADORNES
Merchant, Diplomat, and Friend of Scotland.
Ambassador of Charles, Duke of Burgundy,
to the Court of King James III,
Conservator of the Privileges of
Scottish Merchants in Flanders.
Born in Bruges 1424, killed in Scotland 1483,
and buried near this place.

Erected by the Heraldry Society of Scotland 1990.

The coat of arms is almost remarkably simple: 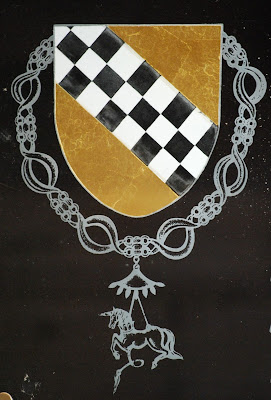 The collar surrounding the shield is that of a Knight of the Order of the Unicorn, into which Order he was inducted by King James III at the end of the year 1468.

While on pilgrimage, while staying at a monastery in North Berwick, he was attacked by an armed gang who killed him on January 23, 1483.

He has his own page on Wikipedia, which gives a much lengthier biography, and even lists his and his wife, Margriet van der Banck's, sixteen children. You can find that article on-line at https://en.wikipedia.org/wiki/Anselm_Adornes.

It's a really nice, modern memorial to an interesting man.