So, having failed miserably at identifying two coats of arms on a large candelabra in St. Michael's Church in Linlithgow, Scotland, this time we exit the church and head a little way up the hill to the gateway to Linlithgow Palace, which contains four coats of arms which I trust (nearly) no one should need a reference book to identify! 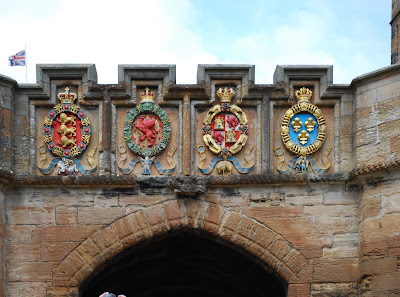 This fore-entrance to the Palace was built about 1533 by King James V, and boasts the national arms of four countries surrounded by the insignia and mottoes of the four orders of chivalry to which James V belonged.

They are, from left to right:

England (Gules three lions passant gardant in pale or), and the collar and motto of the Order of the Garter, Honi soi qui mal y pense (Shame be to him who thinks evil of it): 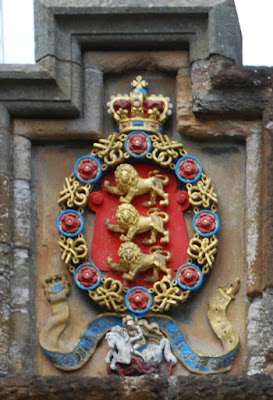 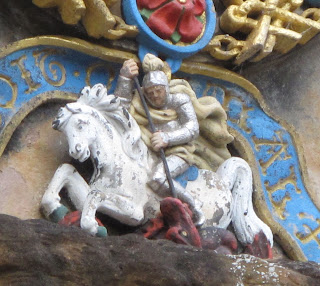 Scotland (Or a lion rampant within a double tressure flory counter-flory gules), and the collar and motto of the Order of the Thistle, Nemo me impune lacessit (No one provokes me with impunity*): 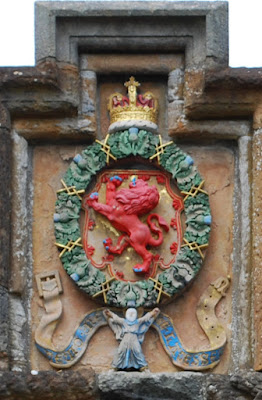 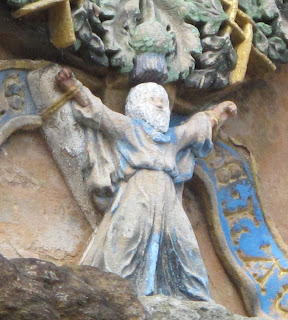 Spain (Quarterly Castile and Leon; or Quarterly: 1 and 4, Gules a tower triple-towered or; 2 and 3, Argent a lion rampant purpure (or as here, gules), and the collar and motto of the Order of the Golden Fleece, Pretium laborum non vile (though the garter here appears to have a variant, Prætium non vilo) (No mean reward for labors): 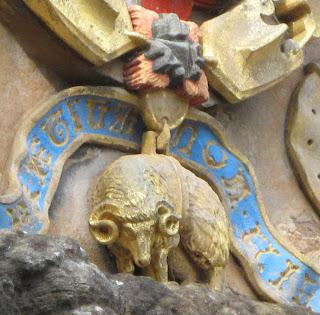 And France (Azure three fleurs-de-lys or), and the collar and motto of the Order of St. Michael, Immensi tremor oceani (Tremor of the immense ocean): 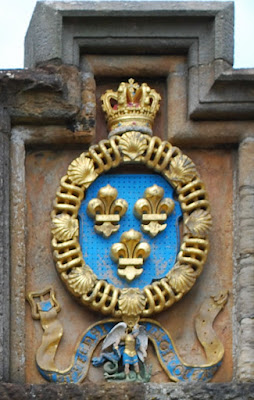 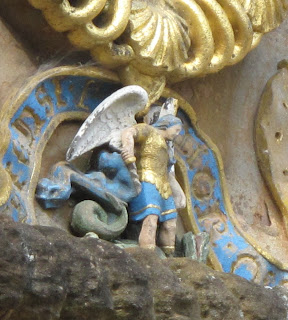 All in all, a very impressive way to let people know just how important you are, don't you think?


* The State of Texas uses a phrase with a similar, though perhaps a little pithier, sentiment in its anti-litter campaigns: Don't Mess With Texas.