The final day of our heraldic tour of western and central Scotland took us to the Isle of Bute, where our first stop was the (remains of) Rothesay Castle. 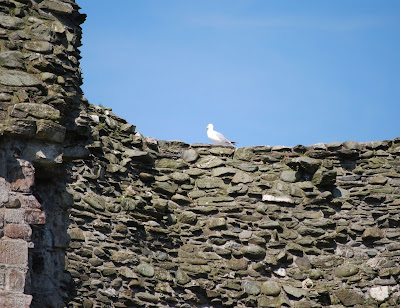 As you can see from the picture above, it isn't quite the edifice that it once was, and the seagulls of Scotland seem to have no more regard for castles than do the pigeons of, say, New York City or Florence, Italy, for the statuary in those metropolises.

Still, at one time it was a major fortress, and a key in the defense of western Scotland. And, of course, there was some heraldry.

The first that we saw was on an explanatory sign which touched on the history of the castle, and had a depiction of the Royal Arms of Scotland. 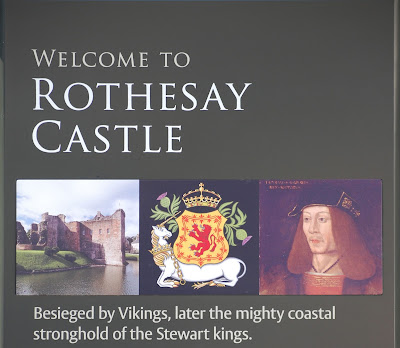 It's an unusual depiction of the arms, as the unicorn supporters have been reduced to but one, and that one lying underneath the arms, while instead of mantling there are two Scottish thistles issuing from the upper corners of the shield. An uncommon depiction, then, but with a bit of whimsy to it which I found refreshing.

The other explanatory sign had a discussion about the city which grew up around it the castle, the Royal Burgh of Rothesay, with another depiction of the Royal Arms of Scotland and of the Burgh. 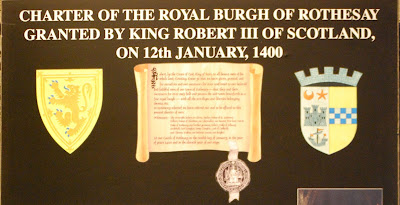 The Royal Arms are on the left, and the arms of the Royal Burgh are on the right. (We will see more of these arms soon, in some of my pictures from the Bute Museum, directly across the street from the Castle.)

I am always somewhat gratified to see the use of heraldry on signs which are erected to give some context to visitors to a site, especially as most tourists have little knowledge of (or, to be honest, much interest in, our busload of heraldists notwithstanding) the heraldry related to that site.