My only real beef with the Burrell Collection near Glasgow is that, despite being beautifully curated, organized, and displayed, there is sometimes a lack of information which can be a bit frustrating for those of us who would really like to know more detail about an object and its history.

For example, they have this on display: 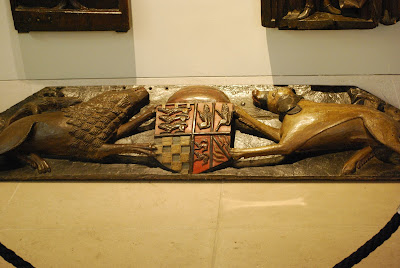 The explanatory card next to it gives only the following information:

Beam
English, c. 1500
The shield of arms is connected with the Howard Dukes of Norfolk and the beam is said to come from their residence at Arundel Castle, Sussex.
Painted Oak

"Connected with" the Howard Dukes of Norfolk, but how? "Said to come" from Arundel Castle, but we don't know?

Here's a close-up of the arms themselves: 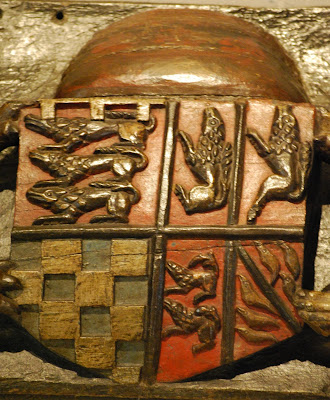 It doesn't contain the paternal arms of the Howards, which (before the augmentation was added after the Battle of Flodden) were Gules a bend between six crosses crosslet fitchy argent, which can be seen in the first quarter of this stained glass window found in the Hutton Rooms at the Burrell Collection with a quarterly version of the arms of Howard: 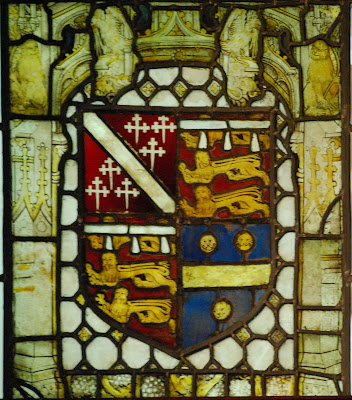 The first and third quarters here appear on the arms of the Duke of Norfolk in the second and third quarters (of eight!): Gules three lions passant gardant in pale or in chief a label argent (the arms of Thomas of Brotherton, fifth son of King Edward I, and Earl of Norfolk and Suffolk), and Checky azure and or (the arms of the Earls of Warren). His supporters are a lion rampant and a horse forceny. (Guillim, A Display of Heraldrie, 4th ed., 1660)

I have to think that the quarters on the sinister side of the shield (to your right as you view it) must belong to one of the wives of one of the Dukes of Norfolk,but without spending more time than I have right not to devote to it, I don't know which wife or which Duke, though given the approximate date of the beam, it may very well have been Thomas, 2nd Duke of Norfolk (1443-1524), whose first wife was Elizabeth, daughter and heir of Sir Frederick Tilney. His second wife was Elizabeth's cousin, Agnes, the daughter of Hugh Tilney. (All that said, though, none of the Tilney arms listed in Burke's General Armory match any of the quarters here, and a knight would not be entitled to supporters, so the hound - like the wife's arms - must come from somewhere else.)

Or it may have been Thomas, 3rd Duke of Norfolk (1473-1554), though the arms borne by his two wives (Princess Anne of York and Elizabeth Stafford) do not match those on this shield, either.

So many questions, so few answers.

Still, though, it was an interesting piece of heraldry, and history, to be able to see.

And, of course, it's got me to wondering how much a set of wooden carved beams like this would cost to have installed in my house. (The living room ceiling goes from about 10 feet on one side to about 20 feet on the other, so there's plenty of space to put up some heraldry!) But with my and my wife's arms on them, of course, not the Duke of Norfolk's arms.

I suppose, though, that it goes back to that old saw, "If you have to ask, you can't afford it." Still, though, why not dream big?