Another Piece of Heraldry That;s A Little Off The Mark


After running across the Boston Athletic Association's logo/arms/ crest/whatever the I posted last time, there's another coat of arms that's made the news recently. 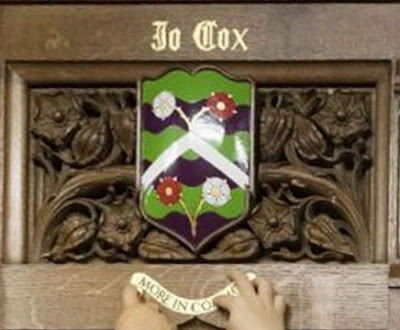 The "arms" of Jo Cox, the Member of Parliament who was murdered on June 16, 2016, have been erected in the House of Commons in her memory. MPs who are killed while in office are remembered in this way at Parliament.

The arms are the result of a design by Garter Principal King of Arms taking into account the desires of the family, including the children. The arms were granted to her widower with authorization to display them on a monument to her memory.

The design, though, however meaningful, is somewhat unfortunate, heraldically speaking. I do not make the following comments to in any way disparage the memory and sacrifice of Ms. Cox. My remarks are directed only to the design of this shield. (Not that I believe that Garter gives a toss about what some Yank thinks of his design! He has done, and I expect will continue to do, quite well without any advice from me on heraldic design.)

The barry wavy vert and sable is low contrast, and at any distance the two colors tend to look muddled. The chevron argent would look more balanced and more like an integral part of the design if it were wider. (As it stands, it is probably blazoned a chevronel, but a single diminutive of an ordinary seldom looks good on a shield.) Of the four roses (symbolizing her family members), the two red ones do not have good contrast with the field ("color on color"), being only helped by the seeding and barbing which is high contrast. I'm not at all sure why the roses are slipped ("stemmed") in pairs like this. Were they left as just the blossoms, they could be arranged to better balance the shield, and would allow room for the chevron to assume its rightful size.

Lest anyone think that all I am going to do here is carp about everything in the design, I have to say that I really like the motto, More In Common, which was inspired by her maiden speech as an MP, and which has several layers of meaning.

You can find more stories with additional pictures and greater discussion about this shield on-line at: