Another Nice Piece of Armorial Silver


Another nice piece in the Burrell Collection was simply labeled "An English silver SALVER made in 1679-80." 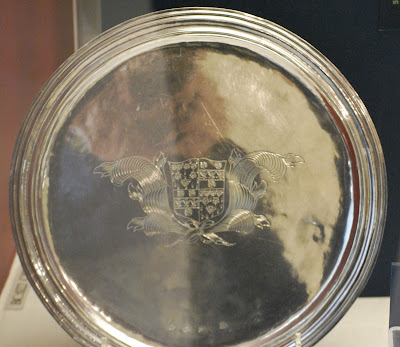 There was, alas, no identification made of the arms that were engraved upon it. 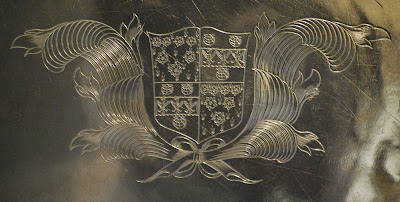 However, a few minutes of research (Papworth's Ordinary of British Armorials) led me to "Busbridge, Echingham, Essex. Erm. six roses gu. three, two and one."

Which is, of course, one less rose than is engraved here. Could it be an error for six? (Questions you always have to ask yourself when trying to trace a coat of arms.)

But a quick search on-line and here we are at a website called "Sussex Families," where under "Busbridge" we are given the following:

Arms. Erm. six roses gu. 3, 2, and 1.
Crest. A cubit arm, habited ...., cuffed ...., holding in the hand a cimeter [scimitar] ppr.
Quartering. Arg. on a fesse, engr. sa. betw. three escallops az. as many eagles, displayed, or, for Reve.
Note. These arms and crest attested, and belong to the family of Busbridge, of Kent, per Robert Cook, Clarencieux, 1588; but the coat of Reve was quartered now in the time of the Visitation.

However, the Visitations of Sussex (1530 and 1633-34, published by the Harleian Society in 1905) give some slightly different information:

Busbridge
[Harl. 1562, fo. 129.]
Arms. Quarterly: 1, Ermine, seven roses gules, four, two, and one [Busbridge]; 2, Argent on a fess engrailed sable, between three escallop shells azure, as many eagles displayed or [Reve]; 3 and 4, [blank].
Crest. A cubit arm erect in chain armour or, the hand proper, grasping a falchion argent, hilt and pommel of the first.


These arms & crest attested to belong to the ffamyly of Busbredg of Kent P. Rob. Cooke, Clarenceulx King of Armes, but the coate of Reeve quartered now in the time of the Visitation 1634.


So that's where we get the seven roses rather than six, and the salver is apparently not in error.

Turns out that, according to the Sussex Visitation, John Busbridge of Hareman in the parish of Echingham, Sussex, married (as her second husband, of three) Mary daughter of John Reeve of the Abbey of St. Edmonsbury in Suffolk.

So, mystery solved! The salver was made for a member of the Busbridge family, of Sussex, and quarters the arms of Busbridge with the arms of Reve/Reeve, a quartering the family had been using for at least 45 years.

How cool is all that?