And, Of Course, Some Fine Armorial Silver


Also in the Burrell Collection in Glasgow was this very fine piece of armorial silver: 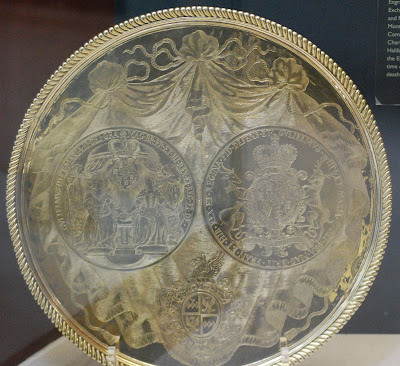 The sign accompanying it says: "An English silver gilt SALVER made in 1695 and engraved by Simon Gribelin. Engraved with the Exchequer seal of William and Mary ..." (with the arms of Mary, having William on an inescutcheon): 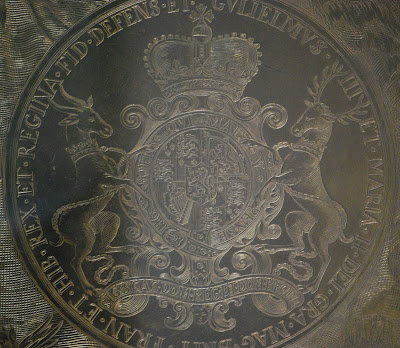 "... and the arms of Montagu. Commissioned by Charles Montagu, Earl of Halifax and Chancellor of the Exchequer at the time of Queen Mary's death in 1694." 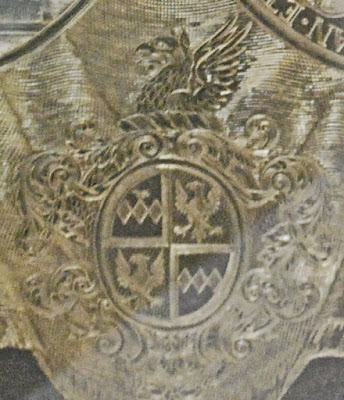 The Montagu arms were a bit of serendipity for me; when I first looked carefully at them, I thought, "I've seen these arms somewhere else!" And it only took me a few minutes to remember where.

Yorktown, Virginia, when we visited there in 2010.

You can see my previous encounter at Yorktown with the Montagu arms (though at Yorktown, the arms were those of John Montagu, Second Duke of Montagu, created Master-General of the Ordnance in 1740 by King George II) in my posts of June 17, 2010 (http://blog.appletonstudios.com/2010/06/solving-heraldic-mystery-part-1.html) and June 21, 2010 (http://blog.appletonstudios.com/2010/06/solving-heraldic-mystery-part-2.html).

George, second Duke of Montagu, is not a lineal descendant of Charles, Earl of Halifax, as the latter was childless and was succeeded by his nephew. The arms clearly demonstrate, however, a familial relationship.

But how cool to run across these arms again, in such a different venue!