Continuing our meanderings through the Burrell Collection Gallery, we ran across several items of tin-glazed earthenware which also happened to be heraldic.

Most of the items were made in Spain, but weren't all intended for the Spanish market.

This first one, however, most certainly was: 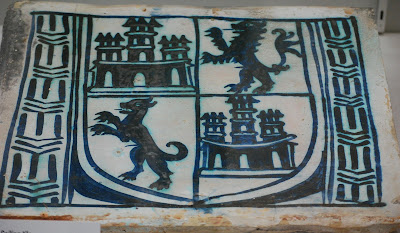 This is a 15th Century ceiling tile from the castle of the Count de Parsent, near Valencia, where it was made.

The arms are similar to, but not, the arms of Spain that we often see, Quarterly Castile and Leon. The difference here is that I don't think that's supposed to be a lion in the lower left. It looks to me more like a wolf, another animal that we often see in Spanish heraldry.

This next one, however, was made for the Tondi family of Siena, Italy: 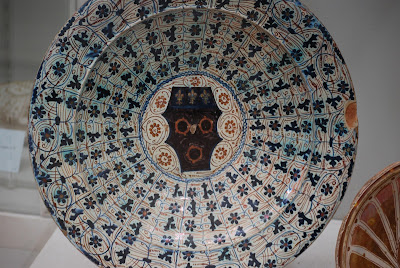 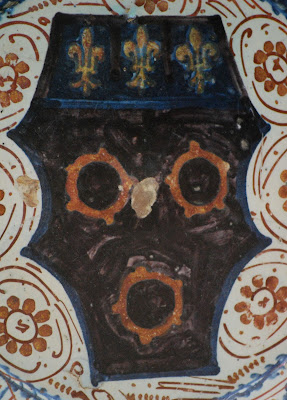 This wonderful dish, with the Tondi arms in the center, was made in around 1460 to 1480. I presume that the upper portion is a capo d'Angio, the chief of Anjou, showing the family's allegiance to the Ghibellines (as opposed to their opponents, the Guelphs).

And the final example, this fine copper lustre dish was, like the other pieces here, made in Valencia in the 15th Century. The photographs here really do not do the piece justice; it's a lot more spectacular in person! 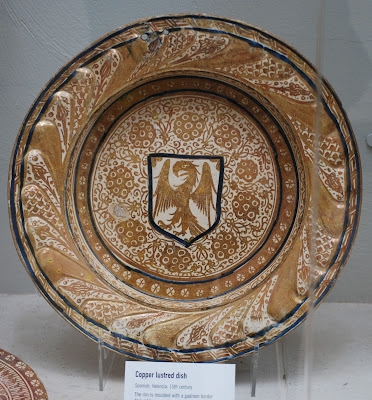 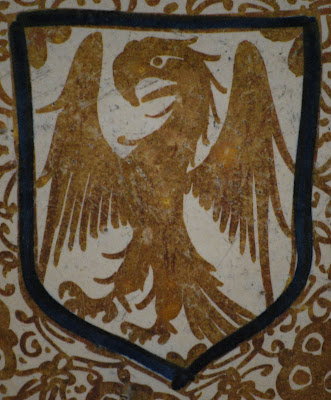 I cannot say if the design in the center (the shield) is supposed to be an actual coat of arms, or whether it is just heraldry-like decoration. Still, what a great piece it would be to have in the dining room china cabinet, right?