Continuing our tour through the Burrell Collection, we ran across this German armorial stained glass window: 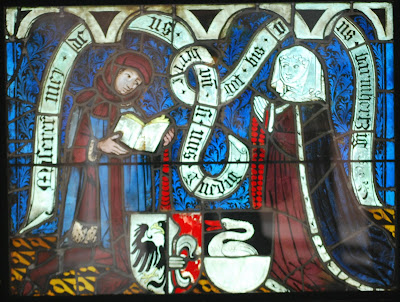 The card which accompanied this piece states:


This donor panel originally formed part of a monumental window in the Carmelite Church at Boppard-am-Rhein 1443 - 46.


For many years it was identified as representing Siegfried von Gelnhausen and his wife, but that has recently been called into question by art historians. 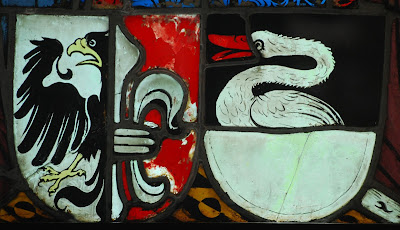 I'd love to know on what basis these unnamed "art historians" question the identification of the arms here. Is the art style wrong for the dates of the donor? His and his wife's clothes don't match the period? Are the coats of arms incorrect? (No, that wouldn't be a judgment for art historians without a solid background in heraldry.) So, what is the issue that casts doubt on the attribution of these arms?

Frankly, I'd be more impressed with the issue of identity if it had been called into question by heralds. I mean, really, the Court of the Lord Lyon is on 40-50 miles away from the Burrell Collection. (Yes, I know, Europeans think that that's a long way away, but it's the same as the distance I drive at least once a month from my house near Dallas to a regular meeting of a lineage society held on the west side of Fort Worth. So not that far.) And I'm certain that the very nice folk at the Lyon Office, if they don't have the resources themselves, have some excellent heraldic connections on the Continent.

Or, for that matter, I'm sure the people at Der Herold in Berlin (http://www.herold-verein.de/), the Westphalian Heraldry Society (http://www.westfalen-heraldik.de), or the professionals at Pro Heraldica based in Stuttgart (http://pro-heraldica.de/) would be more than happy to assist in the identification of these coats of arms.

Still, it's a great piece of heraldic stained glass, isn't it?