A Middleton and Two Campbells


There is another set of three armorial windows in Glasgow Cathedral with the arms of Middleton and two Campbells.

The center window (with the Middleton arms) bears the legend:


This window replaces the Munich glass
presented in memory of William Middleton, Esq.
died September 1850 and incorporates
the coat of arms from that window.

The coat of arms in that window is: 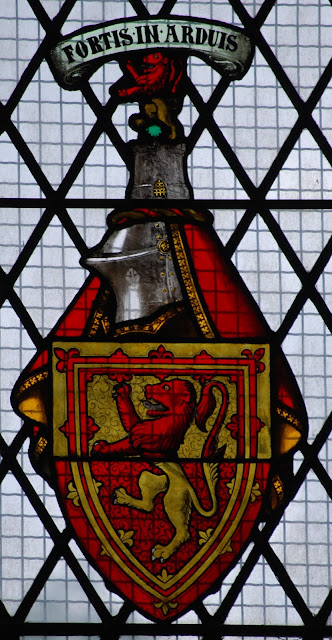 Burke's General Armory gives these arms as: Middleton (Earl of Middleton, Scotland). Per fess or and gules a lion rampant within a double tressure flory counterflory all counterchanged, with the crest Issuing out of a tower sable a lion rampant gules, and the motto Fortis in arduis (Brave in difficulties).

The window here is clearly not that of the Earl of Middleton, but the arms are exactly the same, as is the crest and motto. But the Earldom of Middleton with those arms was created in 1660 and forfeited 1695. (Why, yes, I do have my own copy of Burke's Dormant and Extinct Peerages. Why do you ask?) So I am not at all certain of the relationship, and I have been unable to find any biographical information either on-line or in the Dictionary of National Biography about William Middleton, Esq. who died in September 1850.

To the left and right, respectively, of Mr. Middleton's window are windows containing the following arms: 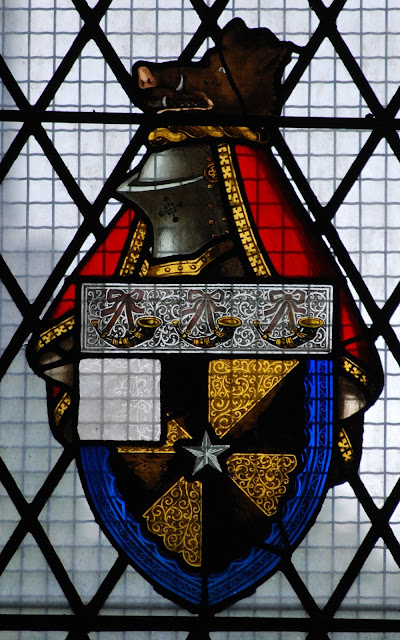 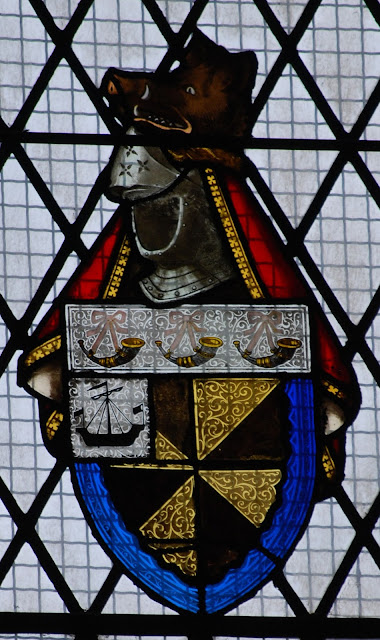 With no biographical information about Mr. Middleton, it is much tougher to track down to whom these arms belong. G. Harvey Johnston's The Heraldry of the Campbells identifies them as Campbell of Stracathro, with a blazon of Gyronny of eight or and sable within a bordure engrailed azure, on a canton argent a galley oars in action sable and on a chief argent three hunting horns sable viroled or and stringed gules. He states that these arms were recorded in 1859.

The left-hand coat also bears a mullet in the center of the shield for a difference, and both coats bear the Campbell crest of A boar's head proper.

It's a shame that we do not have more information about the individuals memorialized in these windows. The detail in the stained glass is of very high quality, and presumably cost a pretty penny to have done. I just can't find (so far) the individuals being memorialized here.