Once again, it seems, that you can find heraldry all about you, even in the relative heraldic desert that is the United States.

I have to thank my wife Jo for this one. (It's wonderful to have someone who supports my hobby in this way!) She was sharing a ride with a friend as they ran a few errands on their way to the monthly meeting of the Dallas Fiber Artists Guild, and as they were driving out of a parking garage, Jo asked her friend to "Stop!" She then hopped out of the car, took a photograph of the decal on a parked car that she then emailed to me, and which I can now share with you: 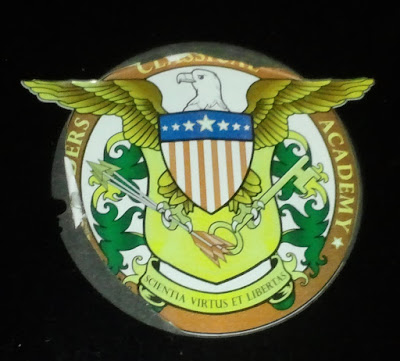 I also found an embroidered version of the logo on-line: 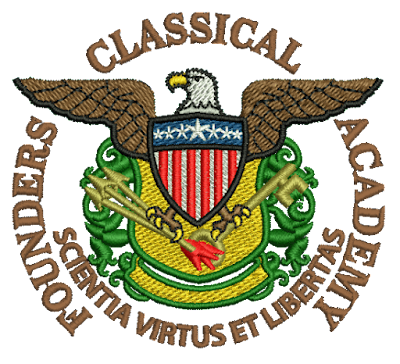 The design is an odd mix of heraldic and pseudo-heraldic: the underlying elements are a plain gold shield with mantling (vert turned or) without a helmet, torse, or crest. Overlying that plain shield is a variation of the arms of the United States - adding seven stars to the chief - with an American bald eagle supporter (also like the arms of the U.S.) but instead of bearing in its talons an olive branch (dexter) and a sheaf of thirteen arrows (sinister), this eagle bears three arrows in its dexter talon and a key in its sinister. Below the gold shield is a scroll with the motto Scientia Virtus et Libertas (which they say is, in English, "Knowledge, Virtue, Liberty," but which my Latin to English translator [well, translators; I tried more than one with the same results] turns into "Knowledge is power and freedom").

I'm thinking that someone unintentionally missed the target in this design, but they clearly did not have more than a passing knowledge of heraldry. It is an error to have mantling without a helm or torse, and placing one shield (with supporter) partially over another shield demonstrates a misunderstanding of how heraldry is supposed to work. Placing the arrows (often seen as a symbol of war or at least preparedness to go to war) in the dexter talon implies that war is more important than knowledge (symbolized by the key). In the same manner, the eagle in the arms of the United States places the olive branch, a symbol of peace, in the dexter talon, giving it more importance than the ability to go to war.

So, all in all, not a very good design, but still, proof once again that you can find heraldry, or heraldry-like designs, anywhere you go!