This next set of memorial windows from Glasgow Cathedral are somewhat unique, in that they appear to have been created to memorialize the husbands of two sisters.

The central window bears the legend:


This window replaces the Munich glass presented in
memory of James Merry, Esq. of Belladrum and
Alexander Cunningham, Esq. of Craigends and
Walkinshaw and replaces the coats of arms from that window.

The left-hand window contains the arms of Merry of Belladrum: 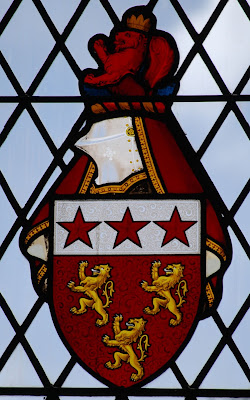 The arms of Merry of Belladrum were matriculated in 1863 and are blazoned: Gules three lions rampant or on a chief argent three mullets gules. The crest, which does not appear in Fairbairn's Crests, is A demi-lion rampant gules crowned or.

James Merry was MP for the Burghs of Falkirk, and an ironmaster from Glasgow. He considerably enlarged Belladrum House after acquiring it in 1857 (below), using the services of the well-known Scottish architect David Bryce. 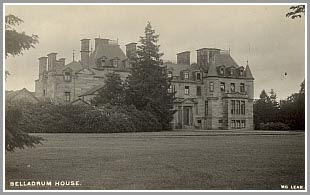 The right-hand window contains the arms of Cunningham of Craigends: 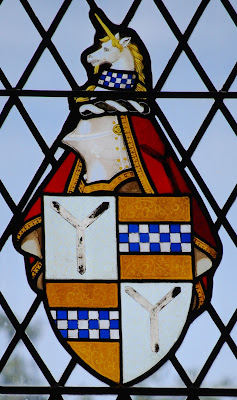 The arms of Cunningham of Craigends were matriculated in 1674 and are blazoned: Quarterly: 1 and 4, Argent a shakefork sable (Cunningham); 2 and 3, Or a fess checky azure and argent (Stewart). (The window reverses the tinctures of the checky fess, making it argent and azure.) The crest, which is also absent from Fairbairn's, combines the typical Cunningham crest with the mark of the Stewarts: A unicorn's head argent crined and armed or gorged of a collar checky argent and azure.

But it is the central window of this set of three that really caught my eye: 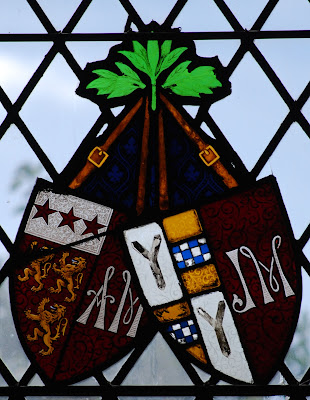 As you can see, it contains the arms of Merry of Belladrum and of Cunningham of Craigends, each impaling a red field, Merry's with the initials "AM" and Cunningham's with the initials "JM". Presumably these two women were sisters named McHardy, and came from a non-armigerous family, but wanted to memorialize their respective husbands (and their husbands' arms), and having no arms themselves opted for a plain field and their own initials.