The Arms of a Prelate in the Sacristy of Glasgow Cathedral


In the Sacristy of the Cathedral in Glasgow, we find two depictions of the arms of Bishop John Cameron.

The first is at the top of the central pillar in the room (on the other side this pillar, also near the top, is a depiction of the arms of King James I of Scotland), where it is surmounted at its base by the fish holding in its mouth a ring, one of the premier symbols of Glasgow: 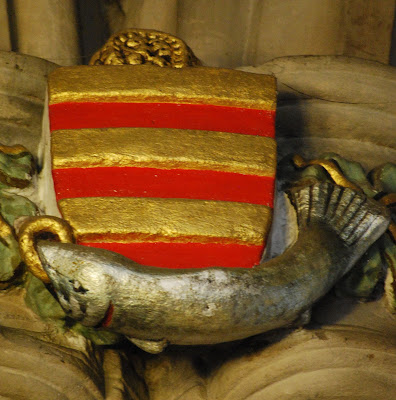 And on the wall immediately over the fireplace is another, larger, rendition. Both examples have a bishop's crozier behind the shield. 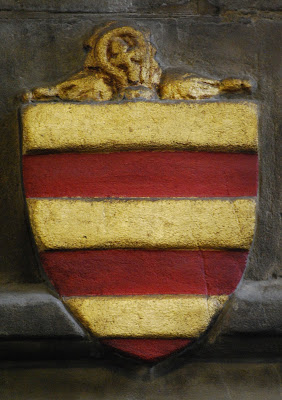 The arms are a variant of the arms of Cameron (found both as Gules three bars or and less frequently as Or three bars gules), Barry of six or and gules. (It is entirely possible that the one on the column may be Or three bars gules; the fish is covering the lowest part of the shield, but it seems to me that there is sufficient space there for another gold trait, not seen, at the bottom of the shield.)

John Cameron (died 1446) was a 15th-century Scottish cleric, bishop of Glasgow, and Keeper of the Privy Seal.

A licentiate in decrees (law), and provost of Lincluden, he became an official of the bishopric of St. Andrews, and a canon of Glasgow, as well as secretary to Archibald Douglas, Earl of Wigtown, who secured for him the living of Rector of Cambuslang.

He transferred into the service of King James I as a secretary in July 1424, and became Keeper of the Privy Seal. When William de Lawedre, bishop of Glasgow, another close advisor of King James, died in 1425, the King chose John Cameron as his successor. John was thus elected to the see, but it was discovered soon after that the pope had already reserved the see for his own nomination. Nevertheless, Pope Martin V provided him to the see on 22 April 1426. He was consecrated sometime in 1427.

John was one of the most intimate advisors and associates of King James, and suffered unpopularity as a result of many of James' actions. On a number of occasions he faced accusations of improper conduct from the papacy, and was accused of being a bad influence on the king, although in reality John was James' man, not the other way around. John also served as an ambassador on embassies to England in 1429, 1430, and 1431. In November 1432, John passed through England again, this time on his way to Rome. He was in Bologna in July 1436, but back in Scotland by September 1437.

He died on 24 December 1446 at Lochwood, seven miles from the burgh of Glasgow.