The Arms of Oswald of Scotstoun


Here is yet another armorial memorial window to be found in the Glasgow Cathedral, this one to a family with some ties to another family whose arms we have already seen.

The window bears the legend:


This window replaces an earlier window
to the memory of the family of Isabel
Oswald of Scotstoun, 1856, and
incorporates the coat of arms from
that window. 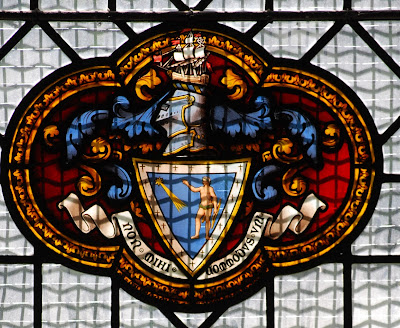 The arms of Oswald of Scotstoun were first matriculated in 1764 and are blazoned: Azure a savage wreathed about the head and middle with by leaves having a quiver of arrows by his side bearing a bow in his left hand proper and pointing with his right to a blazing star in the dexter chief point or within a bordure ermine. The crest, not listed in Fairbairn's Crests, is A three-masted ship with the lower sails furled proper flags flying gules, and the motto (also not found in Crests) is Non mihi commodus uni (Not for myself [a] comfortable one [life?]).

Unusually for Scotland, although there are several other instances also to be found among the armorial windows in the Cathedral, the motto is placed beneath the shield rather than above the crest. 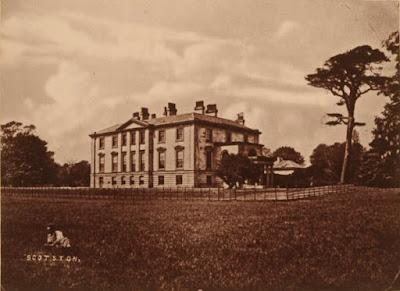 Scotstoun is situated on the right bank of the Clyde in the county of Renfrew. The house was originally built about the beginning of the eighteenth century by William Walkinshaw, the then owner, who also adorned the place "with curious orchards and gardens, stately avenues and large enclosures sheltered with a great deal of beautiful planting.” The river front was added in 1825 by the late Miss Oswald from designs of David Hamilton.

George Oswald (1735-1819) was a banker and a tobacco merchant who was elected Rector of the University in 1797. A minister's son from Dunnet in Caithness, Oswald came to Glasgow to work for his uncles, the leading tobacco merchants Richard and Alexander Oswald. He became a partner in the Glasgow tobacco firm Oswald, Dennistoun & Co and in the Glasgow Ship Bank. He inherited the estates of Scotstoun and Balshagray near Glasgow and Auchincruive in Ayrshire.

We have already shared several Dennistoun arms to be found in Glasgow Cathedral in our post of November 17, 2016 at http://blog.appletonstudios.com/2016/11/armorial-windows-to-three-dennistouns.html

James Oswald was the son of a well-to-do Burgess of Kirkwall in Orkney, who came over to the mainland in the middle of the seventeenth century and settled in Wick. He had two sons, James and George who were both ministers. James was an Episcopal minister and George was a Presbyterian minister.

James (the Episcopalian minister, 1654 -1699) had two sons Richard (1687 - 1766) and Alexander (1694 - 1763) who were rich merchants and shipowners. The brothers built themselves a grand mansion in the Stockwell area of Glasgow called "Oswald's Land with great cellars below to store tobacco and wines but it was demolished around 1875 to make way for the new bridge being built for the Union Railway Company. They bought Scotstoun estate in 1751. They were bachelors and died at Scotstoun House (which had been built by the above mentioned William Walkinshaw). The estate passed to George Oswald, their second cousin (the son of the Presbyterian minister).

That George Oswald was the Presbyterian minister of Dunnet and had eleven children, the eldest son being James.

This James Oswald (1703-1793) was a minister like his father and succeeded him at the parish of Dunnet. He was a Doctor of Divinity and was the Moderator of the General Assembly in 1765. He later moved to Methven in Perthshire and stayed there as minister until he was aged over eighty when he moved to Scotstoun. He had a number of children, of whom his son George was to inherit Scotstoun Estate from the two bachelor brothers Richard and Alexander as explained earlier.

We now come to George Oswald of Scotstoun (1735-1819) who inherited the estate in 1766. He was a successful Glasgow tobacco merchant and was also a partner in the famous Old Ship Bank. He was Rector of Glasgow University in 1797   His son James Oswald of Scotstoun (1774-1822) a captain in the Royal Navy inherited Scotstoun and when he died in 1822 (presumably unmarried) it passed to his sister Elizabeth (1767-1864).

(Just to complicate matters, there is another James Oswald (1779 - 1835) who was well known in Glasgow. This James was the elder son of Alexander Oswald of Shieldhall who was the brother of George Oswald of Scotstoun (see above). This James was MP for Glasgow and inherited the estate of Auchincruive. According to reference book called "St. Mungo's Bells" published in 1888, Oswald Street in Glasgow was named after the Alexander Oswald of Shieldhall.)

Elizabeth was known as "Old Miss Oswald" and was born and died in Scotstoun House. By the age of 90 she had never seen a doctor and she died aged 98.

On Elizabeth's death, Scotstoun passed to the grandson of her sister Katherine.

Katherine had married Robert Haldane of Airthrie so became Mrs Haldane. They had one married daughter, Mrs Haldane Gordon who had one son James Gordon Oswald. (Note how these families incorporated maiden names and inheritance names into their own name).

James Gordon Oswald was the last owner of the estate of farmlands and it was he who started to feu off the estate for housing at the end of the 1800's. He died at San Remo, Italy in 1897, but his obituary in the Glasgow Herald concentrated on the history of the family and said very little about the man himself. In the history of Scotstoun Churches there is a reference to the fact that he laid down a condition when granting fueus for Scotstoun which stated that "the trafficking or selling spiritous or fermented liquors is forever prohibited".

Following his death in 1897, he was succeeded by his son James William Gordon Oswald who cotinued to feu off the estate and his name appears in many title deeds for South Jordanhill.

All in all, a fascinating history of a family with a most unusual coat of arms.