Royal Arms in the Sacristy of Glasgow Cathedral 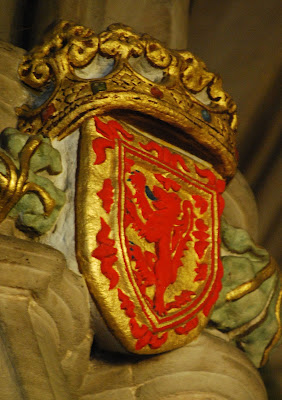 This is, of course, the Royal Arms of Scotland, Or a lion rampant within a double tressure flory counter-flory gules. Here the shield is surmounted by a crown.

There is another depiction of the Royal Arms in the Sacristy, placed on the wall in which is set the door through which you enter the room. 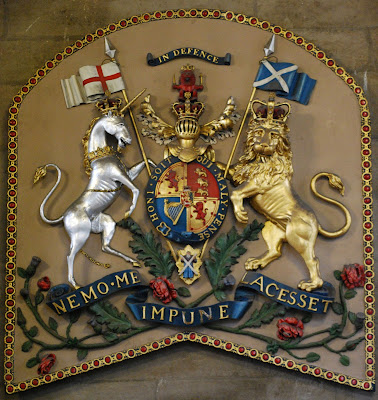 It is, of course, of a later date than the arms of James I, above, consisting as it does of the Royal Arms as used in Scotland with an inescutcheon of Hanover surmounted by an electoral bonnet, making this achievement of arms that of King George III as used from 1801-1816. (In 1814, the Electorate of Hanover became a kingdom, and the electoral bonnet was replaced by a crown in the Royal Arms two years later.)

The arms have Scotland in the first and fourth quarters, with the unicorn supporter to dexter and the Scottish Royal crest atop the crown and the Royal motto below the shield. If you look carefully you will note that the branches behind and beneath the motto contain both roses (for England) and thistles (for Scotland), as well as both rose and thistle leaves.

So here in one small part of the Cathedral you have depictions of the coats of arms of two kings, who reigned over Scotland some 400 years apart!